I joined The Penny Hoarder in Aug. 2016 as the company’s first SEO manager.

I’d worked in search engine optimization and content marketing for several years in different agency settings before making the move to digital media. The Penny Hoarder is a personal finance-meets-lifestyle publication and high-traffic website. I was hired to fine-tune its SEO and establish processes for different departments as the site — and team of 36 — grew.

When I came on board, the company had recently been recognized as the No. 1 fastest-growing private company in America by the Inc. 500.

The website saw a little less than 18 million pageviews, including 1.1 million organic sessions a month. There was a lot to be happy about... but there was also room for improvement.

By implementing these four strategies, we improved our site visibility — and increased our organic sessions a whopping 70% — in five months.

First Order of Business: Get the Executive Team On Board With SEO

Nick Saban is the head coach at the University of Alabama. He’s known for his — we’ll say passionate — coaching style and press interviews. But he’s also known for his thoughts on leadership.

At my last agency job, we hired a lot of people fresh out of college. For some, it was their first management position; for others, it was their first-ever job. As a result, my bosses asked me to conduct leadership trainings with the young staff.

I often relied on Coach Saban to help me motivate the team. Here’s a snippet of an interview with him in Fortune magazine:

The contributions of individuals in a group help the drive success of any project. This is also true in SEO.

From editorial to web development and photo/video to social media, each department has a role in improving the SEO of a brand. But sometimes it can be a tough sell for employees, especially if management ain’t buying.

Thankfully, we have a CEO who not-so-secretly loves SEO and a team that was eager to learn more about it. From there, we executed a four-step process to improve the visibility of The Penny Hoarder — a process you can also use to improve your site.

4 Ways We Improved Our SEO

1. We Did Team SEO Trainings

Our site had “good SEO bones” as my colleague — and former Semrush blog editor — Kathleen Garvin put it. Since SEO is constantly evolving, however, we needed to create a couple of living documents about best practices for different departments.

SEO is a team effort: The group needs to know the basics and how their actions can individually and collectively make an impact. I began with an SEO 101 presentation to introduce everyone to basic concepts, then delved into department-specific training.

Our web producer and writer set basic on-page optimization for a post about stock photography.

Now: The writers, editors and visual/video producers all have a better understanding of — and hand in — optimizing a piece of content for the web.

2. We Conducted a Site Audit and Fixed Outstanding Issues

When I first joined The Penny Hoarder, I conducted two audits: technical and organic search.

I used a variety of tools, such as Google Search Console, Ahrefs, Semrush and Google Analytics. I manually surveyed the website, too, and discovered an issue with our AMP plugin.

Google had announced the Accelerated Mobile Pages (AMP) Project in an official blog post months earlier on Oct. 7, 2015. AMP was presented as a way to help rich content load quickly across various platforms and devices. Or, overall, help enhance the mobile web experience.

More than 80% of traffic to The Penny Hoarder comes from mobile devices, so the company quickly leaned into AMP in Q1 2016. Our web development team installed the AMP plugin. But, it wasn’t perfect: Google Search Console alerted me to multiple errors.

Branndon, our lead web developer, put a fix in place that cleared up many of the issues, and I worked manually on the remaining errors. For example, Google doesn’t allow AMP iframe code to request resources from non-secure (HTTP) sites, so I updated URLs in iframes with HTTPS URLs. 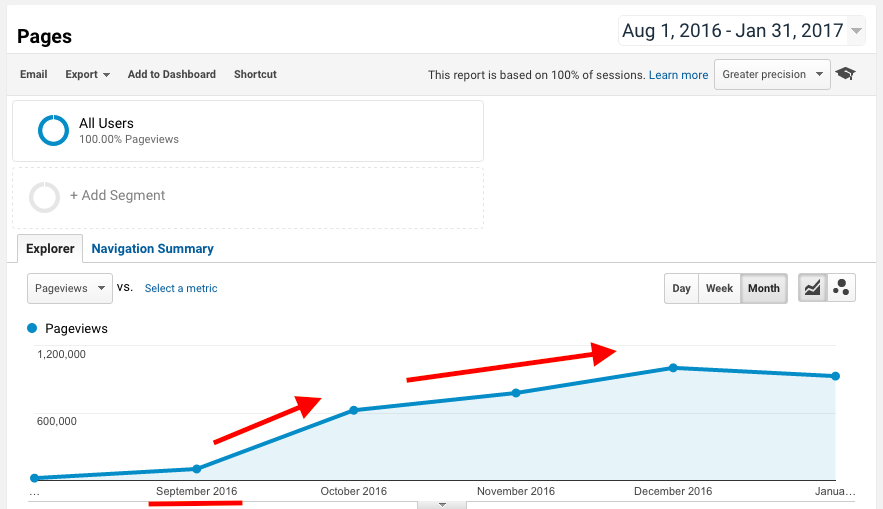 Our AMP pageviews rebounded month over month after fixing the errors

Now: Since putting these fixes in place — and with the exception of an issue that dinged our traffic in January — AMP pageviews have continued to climb, month over month. Rankings have steadily improved, as has overall mobile and desktop traffic.

3. We Looked at What Was — and Was Not — Working in Our Editorial Process

The writers and editors did a good job working keywords into our content. However, as SEO continued to evolve and questions about best practices arose, the staff didn’t have anyone to go to in-house. Once I joined the team, we tackled these issues in editorial:

Our editorial team had been using Google Keyword Planner for keyword research. You never want to rely blindly on one tool; here’s one reason why. Also, Keyword Planner became much less useful for us when Google changed the data provided to non-advertisers.

Now: Our staff uses keyword tools in addition to Google’s, such as Ahrefs, Semrush and search engine result pages themselves.

The Penny Hoarder covers a variety of articles that help people make and save money. Deals on food are also included in our coverage. As such, if we covered a Pizza Hut deal, the editorial team would choose the keyphrase with the highest volume — most likely, “Pizza Hut.” That was a problem since we couldn’t compete with the large pizza chain on the SERPs for that branded term!

We cover similar money-making and saving topics on the website. And, sometimes, we had different articles on our site battling for positions on the SERPs for the same keywords. For example, we had 10 articles on “how to save money on groceries.”

Now: Writers check to see if we rank for a keyword — even if it’s just a simple Google search — or look for another angle so our stories can target different keywords. We’ve also reworked older posts to uniquely target their own keywords.

We had two outstanding issues when it came to links:

We were overwhelming our readers by linking to our other posts. A lot. (Yes, too much of a good thing can be bad).

Internal linking is important for SEO because it brings users to different pages and distributes link juice. But too much internal linking can be distracting; it can come off as spammy. Plus, it was done too liberally — if you link “save at Target” to another story on a new Target hiring policy, you’ll most likely cause the user to jump off the page quickly, and to a nominally relevant page.

Now: It varies by article, but we typically only link to three other articles on the site in a given post. And, we only link to pages that truly correspond to the hyperlinked text.

We have solid content that naturally gets linked to, a PR department that secures press hits and a social team that helps increase our reach. However, we weren’t doing much to actively build links.

Now: Our editorial intern, Jacquelyn, started link building on Quora and Yahoo Finance, answering questions related to the topics we cover. We’re also adding links for sources on Wikipedia... but not to The Penny Hoarder, yet. Adding links to Wikipedia is a little more nuanced, so we’re being good citizens for the web by editing and adding new, non-TPH links for now. WikiGrabber is a great, free tool where you can find — and then replace — broken links on the encyclopedia giant.

After five months of implementing these changes, our organic sessions climbed 71% to 1.9 million in Jan. 2017. Additionally, new users increased 76%, partly due to better keyword targeting in our posts.

Maintaining the momentum is an ongoing process that depends on the contributions of individuals on the team to be successful. Like Nick Saban said, “There’s no ‘I’ in ‘team,’ but there is an ‘I’ in ‘win.’”

What changes are you implementing to improve your site’s visibility this year? Let me know in the comments.
Darrell DavisDarrell Davis is the SEO Manager at The Penny Hoarder, one of the largest personal finance websites in America that helps readers make and save extra money. He has a background in traditional and digital agencies and has expertise in on-page optimization, content development, UX and technical SEO.