7 Reasons To Ditch Snapchat in Favor of Instagram Stories

It might sound a bit crazy, but it has only been a bit over a year since Instagram took a turn at Snapchat introducing Stories.

I say “crazy” because Stories have become such an integral part of the whole Instagram experience, that it is impossible to imagine the platform without them anymore.

In fact, nearly 30% of Instagram users are daily Stories users as well — and that percentage is growing as we speak.

And yet, Snapchat is still there and still growing (albeit slowly). The Kylie Jenner and Ariana Grande generation are still loyal Snap fans. And as marketers, we are told we have to be where our audience is and follow them wherever they go.

Sometimes, however, that doesn’t make much sense.

In this article, I am going to break this marketing credo and put to the test Instagram stories v Snapchat, giving you 7 reasons why your small business should ditch the latter in favor of the former.

Last month, Instagram made a big splash announcing that the platform has finally reached 800 million active users. This means that Instagram grew by 100 million people over the last 6 months. Yes, you heard right: 100 million, in just over 6 months.

In the meantime, Snapchat is still at its first 166 million users — a big milestone for the platform, whose year-over-year growth has been reportedly slipping.

In other words, this means that merely 30% of Instagram — aka the Stories users — is still 1.5 times more people than Snapchat’s entire population. Instagram is a bigger country, and, with the borders constantly expanding, it seems like Snapchat is becoming harder and harder to find on the map.

Snapchat is often dubbed as a platform of choice amongst teenagers, and rightly so. According to Statista, only 14% of Snap’s users are over 35 years old, which means that the core population on the platform is made up of millennials and post-millennials. If this is your target audience, then Snapchat might be the right place to be.

However, it also happens to be that 54% of Snapchat peeps are also active Instagram users, which means that half of the audience you are trying to reach on Snapchat, you can easily meet on Instagram, too. In addition, Instagram’s demographic markup is wider and, more or less, equally divided; 54% of the users are over 35 years old, while the rest, 46%, are between 18 and 34 years old.

Now, here is why it matters to take note of that:

According to Snap itself, in their first S-1 form issued just before they went public, concentrating all their forces on such a narrow, particular demographic does more harm than good, as such an audience is considered to be less brand loyal and more likely to switch to other platforms:

“The majority of our users are 18-34 years old. This demographic may be less brand loyal and more likely to follow trends than other demographics. These factors may lead users to switch to another product, which would negatively affect our user retention, growth, and engagement.”

Snap goes even further to admit that it also “may not be able to penetrate other demographics in a meaningful manner”.

In other words, Snapchat’s stuck in a rut and doesn’t know how to get moving again.

Which leads us to Reason Number 3...

Rumor has it that, while teenagers are still being Snap-loyal, millennials are actually making a move to Instagram. A study by CivicScience has found that Snapchat has been losing around 2% of its millennial audience since the last quarter, while Instagram has been gaining 2% in the same demographic at the same time.

While this “move” has not been officially confirmed by either Instagram or Snapchat, the trend is becoming obvious. Fewer and fewer people are posting on Snapchat, there are more and more personal stories of why somebody’s ditching Snap for Insta, and social media influencers have reportedly given in to the mood and taken action;  Mediakix recently found out that influencers use Instagram Stories 25% more each day than Snapchat.

As we all know, a key component to growth in the digital space is being discoverable and searchable. While Snapchat’s Discover page is a great place for users to find who’s hot on the platform, there isn’t much opportunity for organic discovery through the app itself. In fact, if you aren’t a celebrity already, getting people to notice you on Snapchat is pretty freaking hard. Unlike Instagram, there are no hashtags, no geolocation, no recommendations made within the app, so technically, the only way to grow on Snapchat is through promoting your channel on external platforms.

Such as Instagram. Which is a bit counterintuitive, if you ask me. 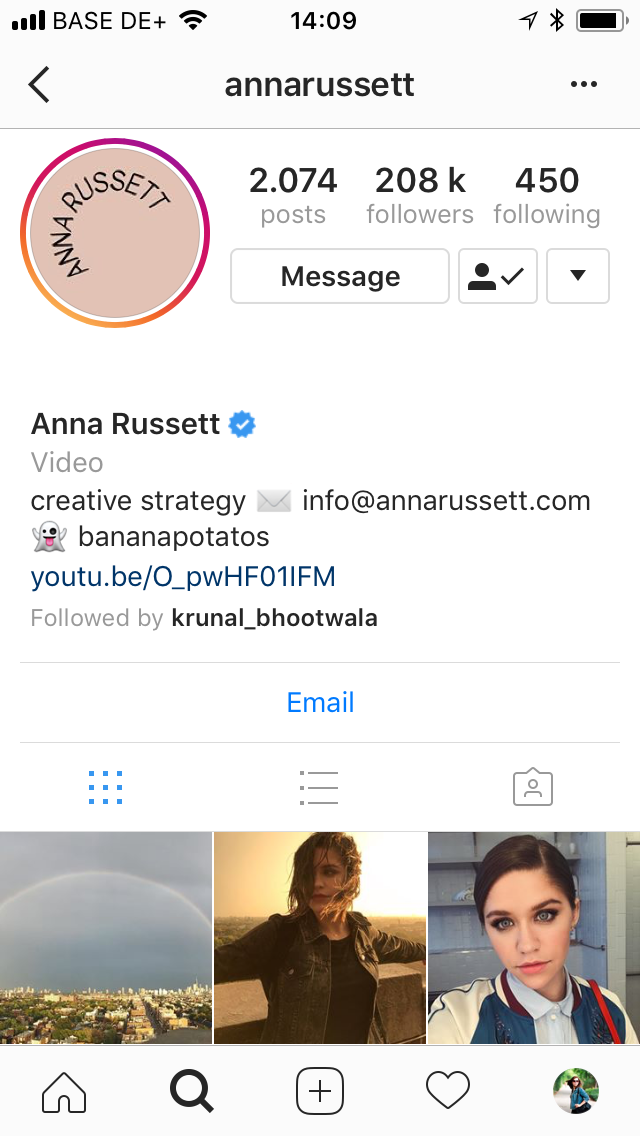 Searchability is also a big pain point on Snapchat. To search for someone there, you are required to know their exact handle name and manually type it in. In contrast, on Instagram it is easy to find someone either through the name or their handle — and the only thing you need to do is start typing a keyword and see Instagram suggest profiles right away. 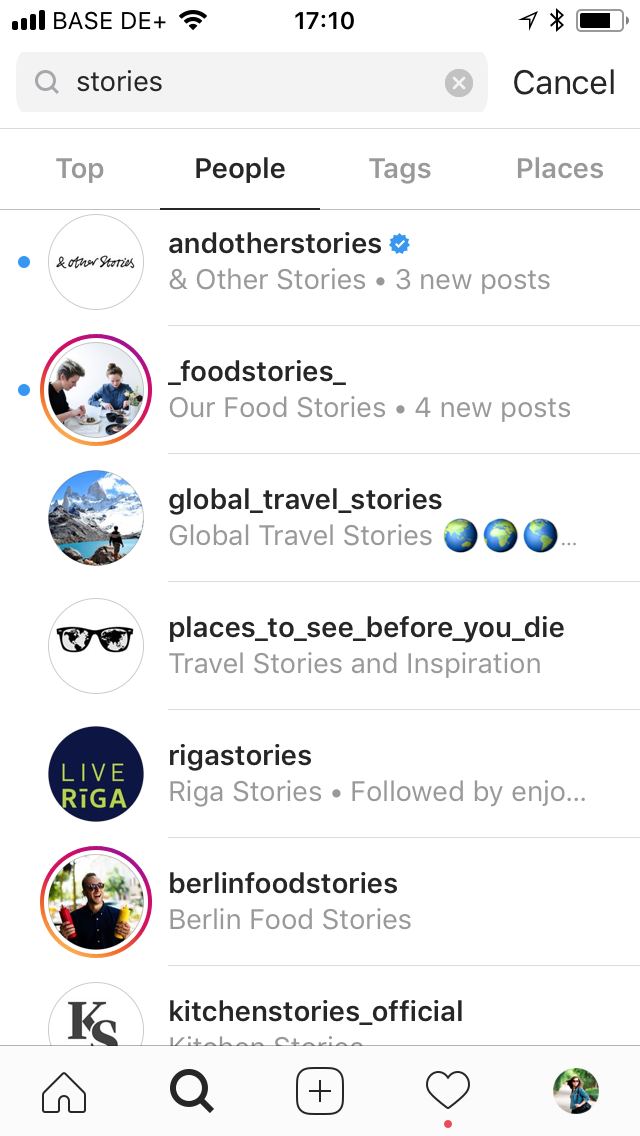 Reason #5: Instagram Has Been Easier to Drive Traffic From

For many marketers and small businesses, there is one simple purpose of being on social - to create awareness around their actual www-brand where they can drive actual sales. You need to drive traffic from social media, otherwise, what is the point?

Until July this year, Instagram has been beating Snapchat in this.

On Snapchat, the only thing you could do was write your link ON the image — then the user would have to remember that link, open a new browser tab, and manually type that link in. It’s a multiple-click disaster, if you ask me — there is so much room for error, so much time wasted, and so much opportunity lost, as nobody in their right mind would actually go through this long, complicated, outdated process.

On Instagram, all you have to do is add a URL to your Story — and all your followers have to do is swipe up. And people ARE swiping -  according to MarketingLand, Stories get 15-25% swipe-through rates for brands and publishers.

Why? Because it is made easy.

Snap did introduce Paperclip this summer, though, which lets companies link to external websites now, but we can’t tell how successful this feature has been just yet.

To begin with, it turned out that marketers aren’t on Snapchat in the first place. Only 7% are on the platform, as opposed to 54% of those who are on Instagram.

But second, it also appeared that even those marketers that are on Snapchat, aren’t very enthusiastic about its marketing opportunities: just 1% — in contrast to 24% — regularly use Snap Ads. And that doesn’t sound too encouraging, as we know that nearly 70% of Snapchat users actually skip ads anyways.

In other words, advertisers have almost zero interest in Snapchat.

Let’s return to Point 4: Discoverability. It is hard to find content on Snapchat, which can make advertising ineffective. Instagram is BUILT for finding what you don’t follow — and Snapchat isn’t. So why put effort into creating content that people can’t find?

Also, the fact that Snapchat only has ephemeral content makes it impossible to run a long-term ad. So why put effort into something that will disappear as soon as you see it?

Another reason might be the fact that it is hard to measure anything on Snapchat. You can’t see how many followers you have, in contrast to Instagram, where you can clearly see your count grow or decrease (or use third-party apps that would monitor that for you). So why reach the audience you can’t see?

Finally, a big faux pas on the Snapchat part - it offers no data of its own. In the era of Big Data, Snapchat relies entirely on third parties in order to offer ad targeting — as opposed to Google or Facebook (which owns Instagram) that collect stats about their users. In the tech world, data is your only currency — and if you don’t have any, well… we all know what that means.

Last but not least, one definitive reason to ditch Snapchat in favor of Instagram is that it reduces your workload by half.

Let’s be honest, stories were shamelessly copied from Snapchat, we all know that. And yet, somehow, Instagram managed to beat Snapchat at its own game. Because the truth is, Instagram didn’t just steal Snapchat’s idea — it also innovated the hell out of it. It built something on top. And as a result, Insta Stories have more users, wider demographics, better functionalities, more room to play for us marketers, and they’re just as fun for the users.

Instagram gives you both the feed and the Stories — and if you can get everything in one place, doesn’t this just make your life so much easier? 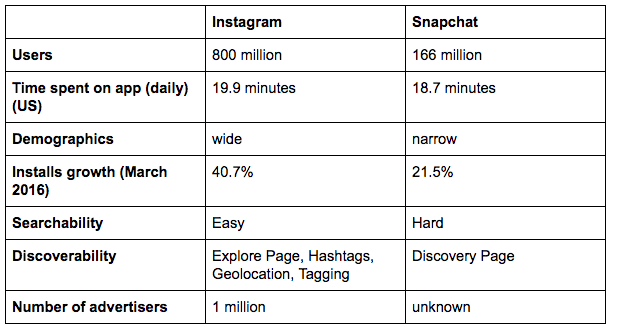 Share
Olga Rabo
Hey there. I'm Olga and I manage lead generation at Iconosquare the leading analytics & marketing tool for Facebook &amp; Instagram. Previously, I ran content marketing for a SaaS startup in Berlin. Feel free to reach out at olga@iconosqua.re if you have any cool content collab ideas!