Featured Snippets February Drop: Are We Seeing a Full Recovery?

We’re used to the fact that featured snippets can come and go as Google is constantly reviewing its offering and improving user experience. Yet, back in February, we witnessed some historic featured snippet lows. 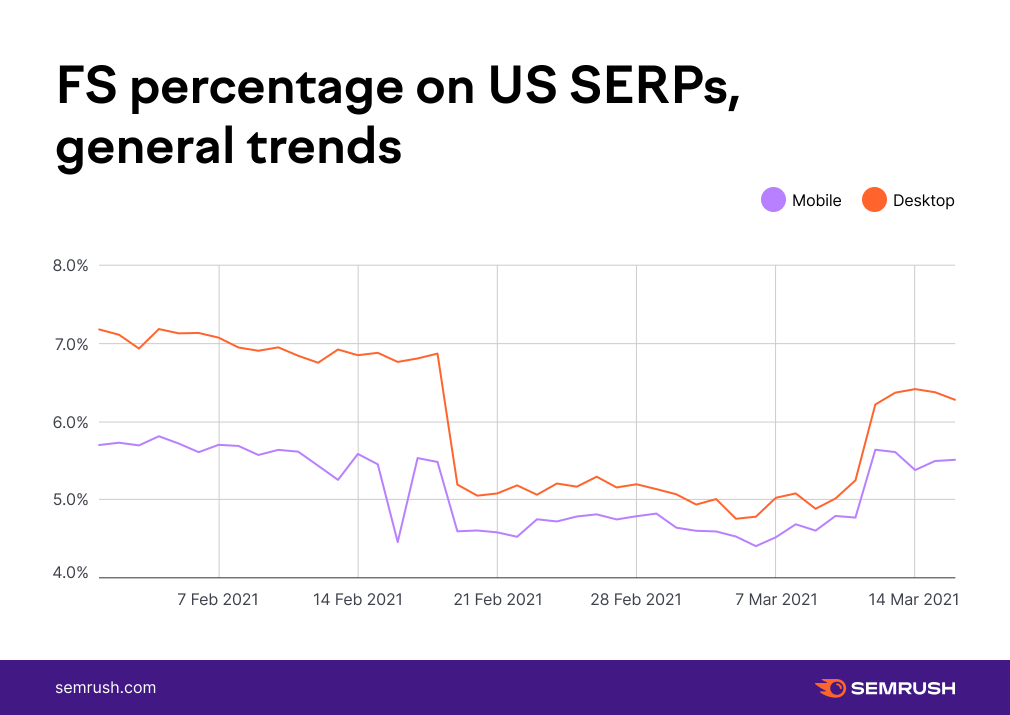 In February, we saw a decrease of around 25% in featured snippets on desktop and 17% on mobile, but around March 12, the numbers started showing signs of recovery. The featured snippet count averages on mobile SERPs went back to normal shortly afterwards, while desktop SERPs are still falling behind what they used to be.

We looked into which industries, keyword categories and countries got the biggest hits, and what the situation is now.

The drop seems to have affected mostly English-speaking countries’ SERPs, with Australia, the UK, and the US topping the list: 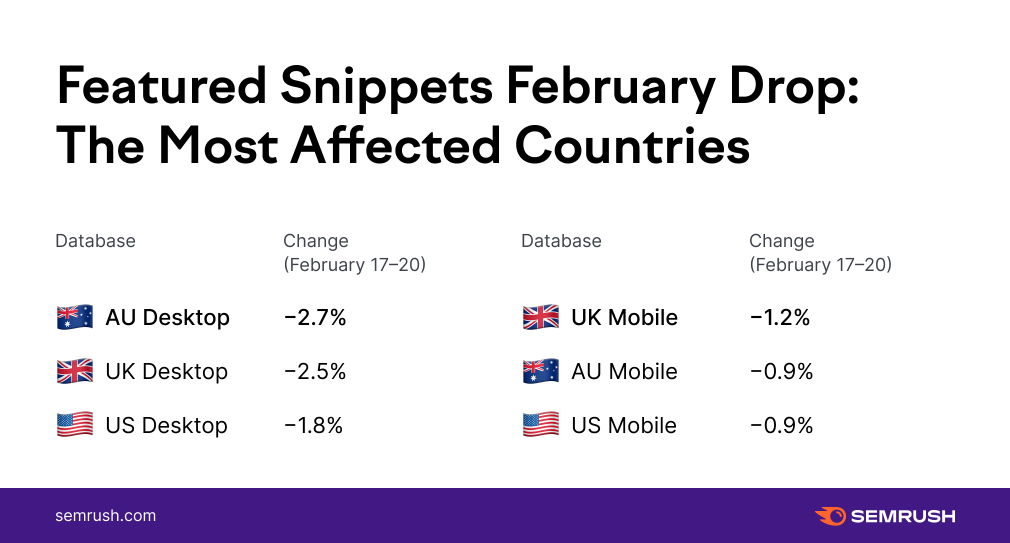 When we consider the desktop/mobile featured snippets drop, these countries lead the way, losing around 2% of their featured snippets between February 17 and 20. The impact was bigger on desktop SERPs. Italy, Spain, Germany, France and Japan were also hit, but the drop only resulted in a loss of 0.2%.

Below, we've focused on the US SERPs.

The most affected industries in the US

For this part of the analysis, we looked into the difference between the total number of SERPs per industry that included a featured snippet before and after the drop until March 16, when most sectors demonstrated clear signs of recovery.

On average, desktop SERPs have lost a small fraction of their featured snippets (-0.47%), whereas mobile SERPs seem to have gained a small uplift (+0.29%).

Across both desktop and mobile web, the SERPs categories that lost the largest number of featured snippets are almost identical:

Computers & Electronics, Science, Health, and Jobs & Education made it to the top 5. The last category on the list includes Food & Drink for mobile and Law & Government for desktop. 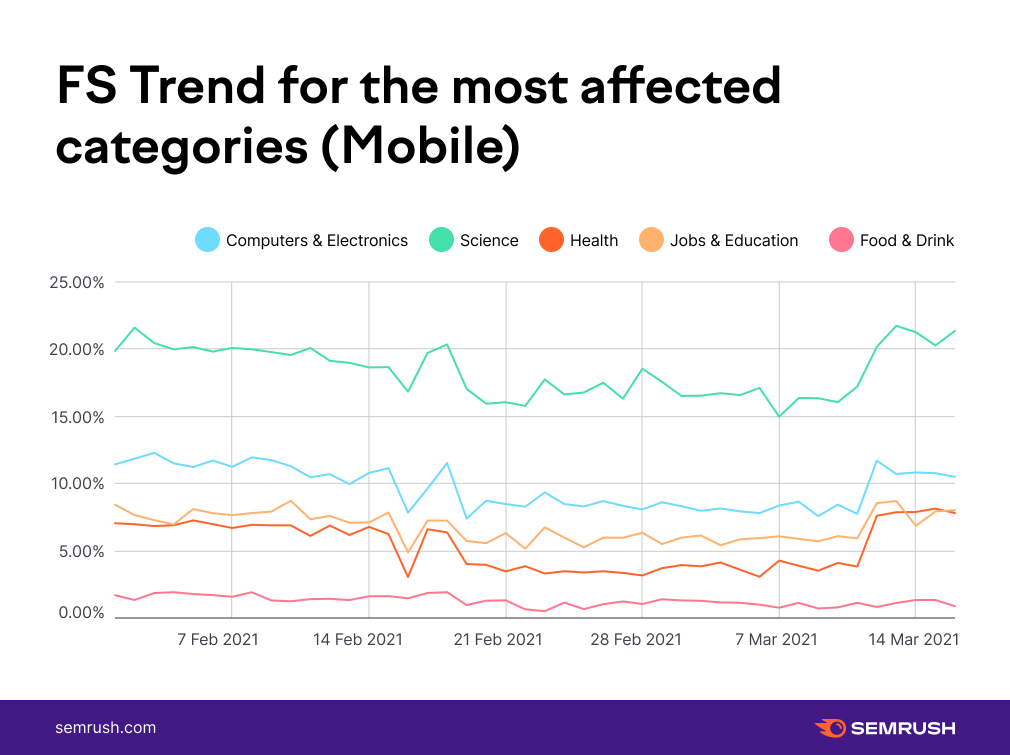 By March 16, mobile SERPs showed a full return to pre-drop levels, with most categories within the top 5 even showing minor increases (i.e. Health: +2.60%, Science: 1.99%). The only exception here is Food & Drink, which still had 0.5% fewer featured snippets in the relevant SERPs. 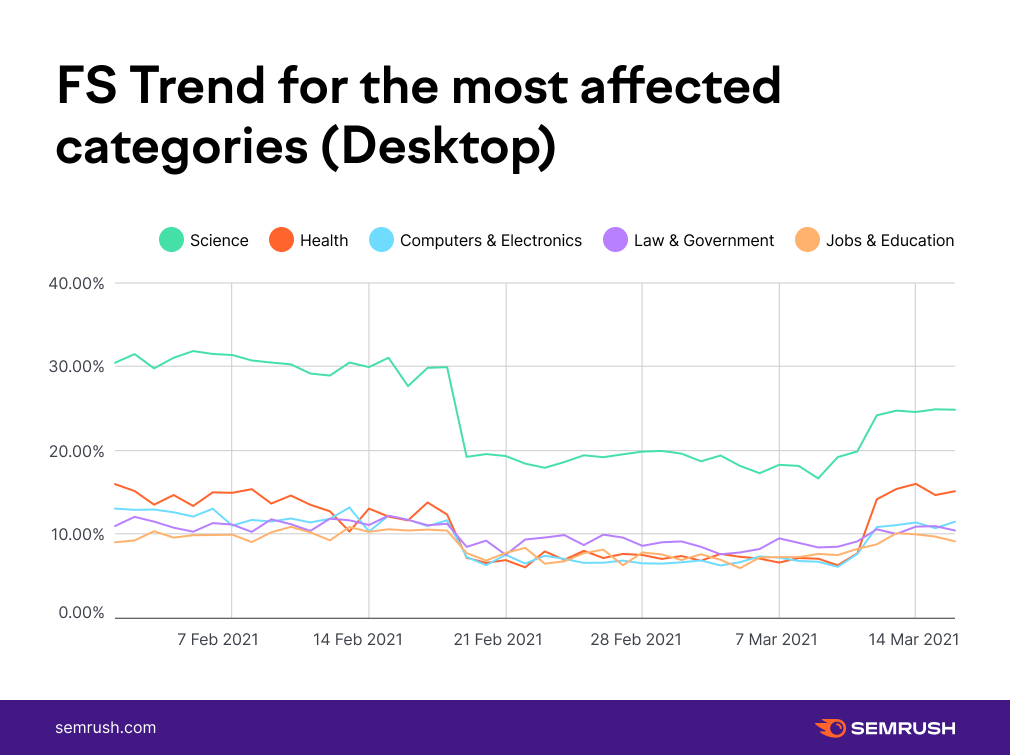 The update effects seem to have hit desktop SERPs harder.

While the Computers & Electronics, Jobs & Education, and Law & Government categories are almost back, Science — an industry that lost around 11% of featured snippets right after the drop — is still down by 4%. The only SERPs set experiencing a positive trend on desktop is Health, which has increased its number of SERPs with a featured snippet by 3%.

On desktop, the picture was very similar, but the percentage of SERPs losing their featured snippet was larger compared to mobile (44%):

The Food & Drink, Health, Computers & Electronics and Business & Industrial related SERPs were affected the most across both desktop and mobile web.

On desktop, however, the Beauty & Fitness industry saw a change of -45% in featured snippets, while on mobile, Arts & Entertainment (-29%) made it to the top 5 most affected sectors.

We looked at the recovery rate, by comparing within each industry the percentage of SERPs with a featured snippet right after the drop and stacking these numbers up against the current stats.

Again, mobile SERPs recovered faster than desktop: on average, mobile SERPs with featured snippets went up by 3%, while desktop is still 11% behind the pre-drop %.

On industry level, the sectors that have been hit the hardest are: 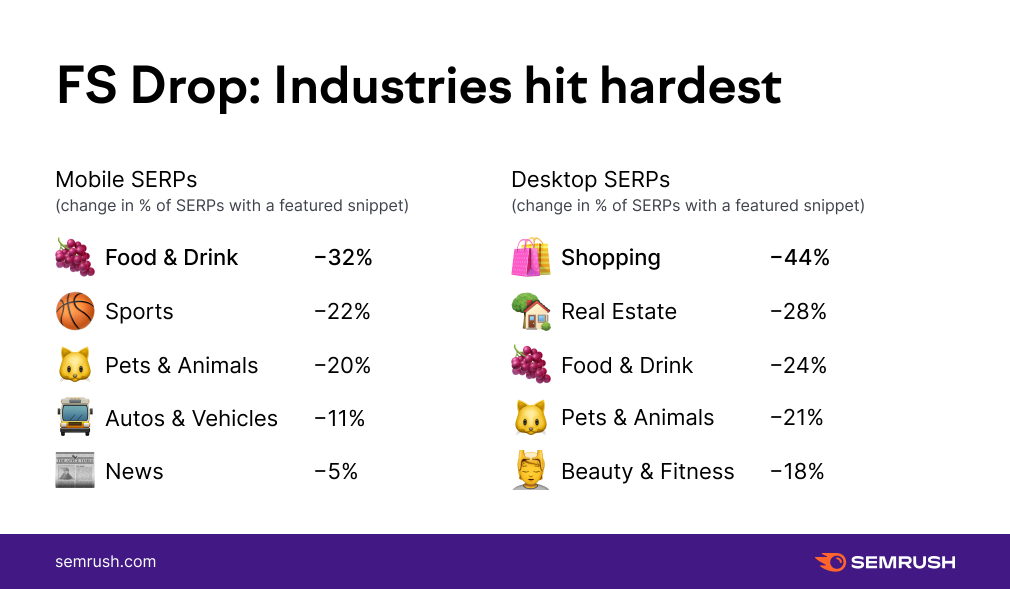 SERPs in the Food & Drink and in the Pets & Animals sectors have been significantly affected across both desktop and mobile and have still a way to go to reach pre-drop levels. 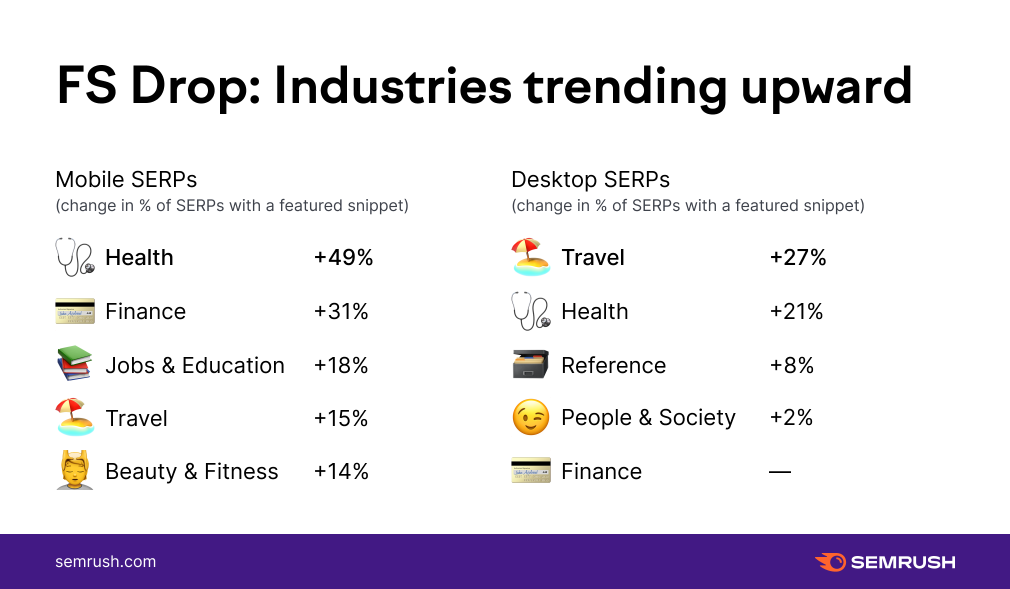 So most of the industries that experienced the biggest drops on February 19, have now recovered or have even seen an increase in the percentage of SERPs with featured snippets. The only exceptions are the Food & Drink (-32%) and Business & Industrial (-2%) categories.

Keyword categories that were hit the hardest

Even if your website falls into one of the industries that seem to have recovered, you may still be affected by the drop. For example, if your site held featured snippets that were triggered by the hardest hit keyword categories, you could still be experiencing traffic loss. This is why we also looked at the featured snippet drop from a keyword perspective. 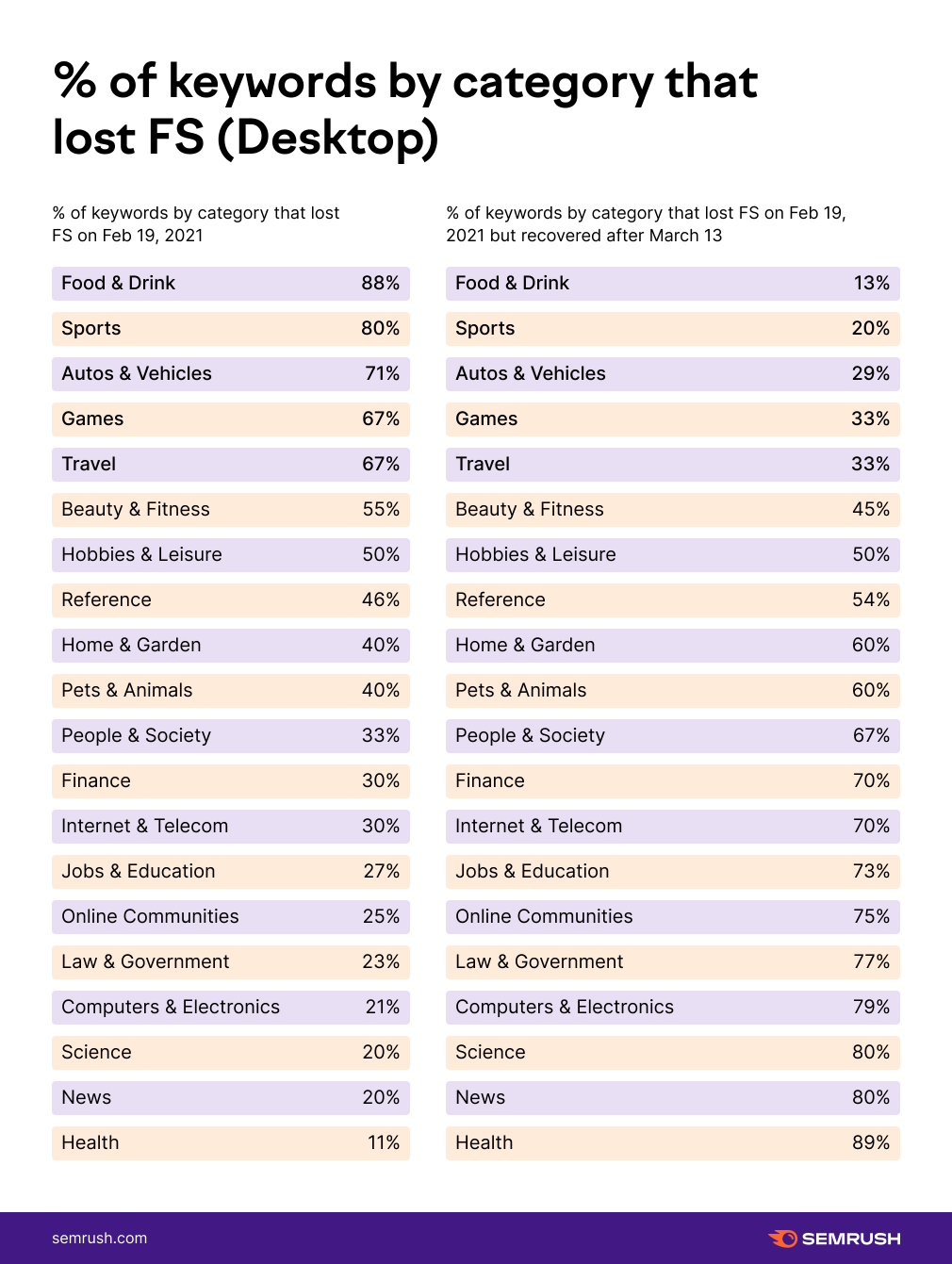 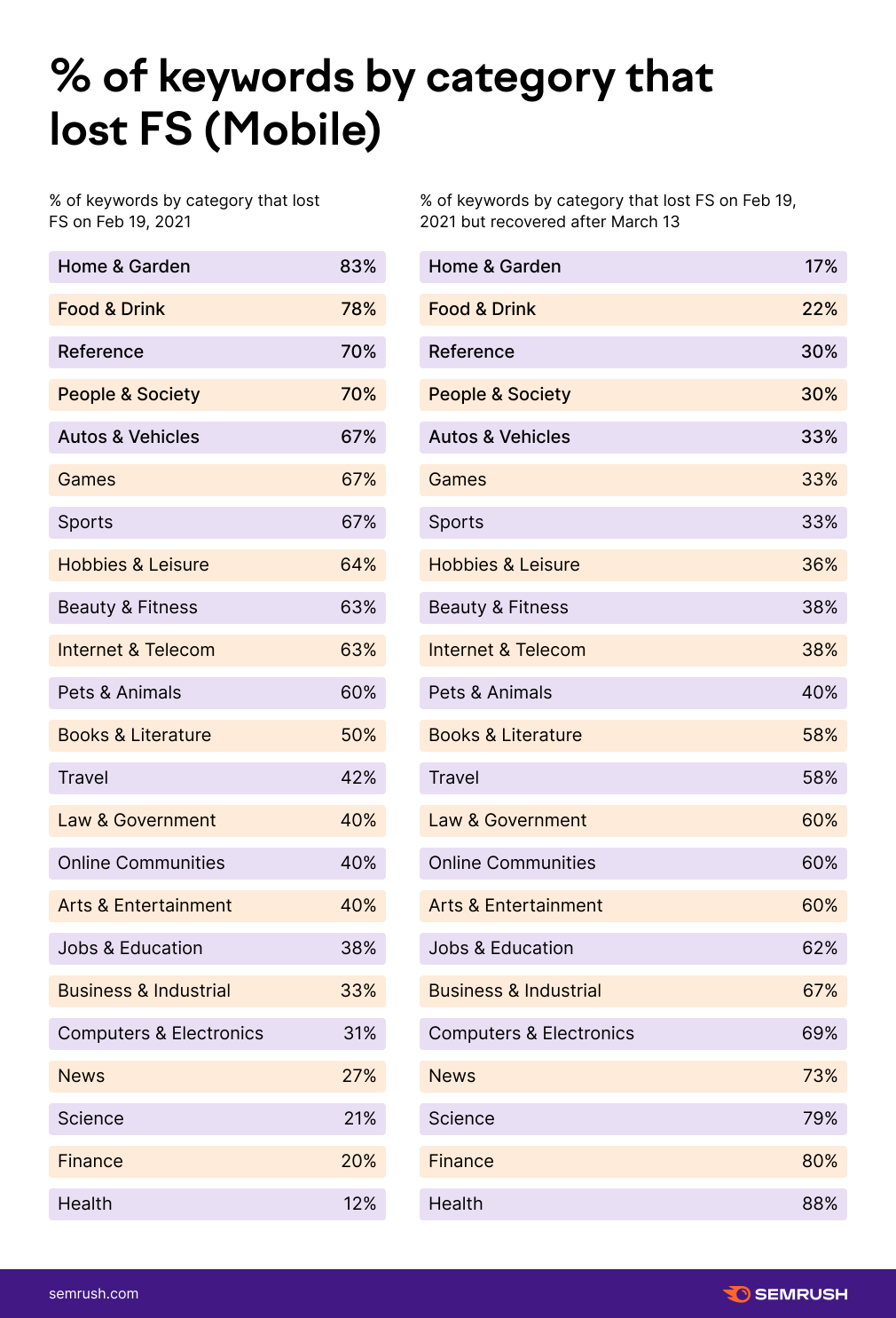 Interestingly, across both desktop and mobile SERPs, the keywords categories that saw the highest drops in featured snippets are having the slowest recovery rates.

The update took the smallest toll on health-, news-, and science-related search terms on desktop and mobile web.

We tried to spot a pattern or a consistent logic behind the keywords that got their featured snippets back vs. those that didn’t, but it is impossible to tell what has been going on in the background. Here are some examples of search terms whose featured snippets returned to pre-drop levels from the Health category (which is always worth looking into in more detail because of the gravity Google places on YMYL pages): kidney, veneers, sleep study, wisdom teeth. And here are some for which featured snippets have not returned: how to get pneumonia, taking braces off, stress echocardiogram.

Will we see a full recovery?

Based on our analysis, we cannot make grand assumptions about the reasons behind the featured snippets drop or what that means for the future of SERPs.

We cannot predict Google’s plans for the future, but currently, it seems like mobile SERPs have recovered and stabilised compared to desktop following the drop on February 19. We’ll keep monitoring the SERPs for future changes.

Erika VaragouliI create local and global content marketing strategies here at Semrush. I started my career as a journalist, but gradually the world of SEO and content marketing won me over. I am obsessed with creating content people love, Nick Cave, and Italian films. Fueled by caffeine.