How To Get the Most Out of Competitive Metrics in AdWords

According to the IAB Internet Advertising Revenue Report, internet advertising revenues hit an all-time, first quarter high of $11.6 billion in Q1 of 2014 in the United States alone. This 19 percent year-over-year increase came to no surprise for PricewaterhouseCoopers Partner David Silverman “with consumers increasingly relying on digital screens for everything from information to entertainment.” At the same time, these numbers are a testament to agencies and businesses that have clearly been able to find relevant audiences and utilize budgets effectively.

In order to stay ahead of curves like these, constant budget monitoring and campaign optimization is a must. One way to outperform competitors and improve your online advertising results is to fully understand and use the competitive metrics in Google AdWords.

Where To View Competitive Metrics in Google AdWords

Competitive metrics are one part of the custom column sections AdWords allows you to add. Depending on what kind of campaigns you are running, you will have a different selection of metrics. Competitive metrics show up as default for everyone.

In order to customize your columns, follow these steps: 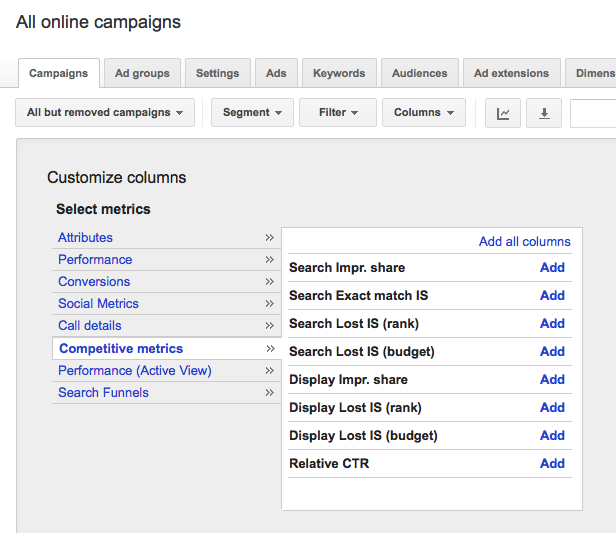 You should now have a new set of columns added on the right side of your normal campaign statistics. Let’s look at what each of the metrics means and how you can use them to your advantage.

What The Metrics Stand For

Google’s definition of Impression share: “Impressions you’ve received on the Search Network divided by the estimated number of impressions you were eligible to receive.”

Before taking any action based on Impression shares when it comes to Display Network campaigns, consider the Relative CTR.

Google AdWords calculates the Relative CTR for Display Network campaigns by dividing your CTR (click-through-rate) by the average CTR of all advertisers on the placements where your ads and the ones of your competitors are shown. While the Impression Share typically changes more gradually over time, the Relative CTR may change frequently based on what you or your competitors are doing.

This value is not shown in percentage but as a multiplier. Let’s look at a concrete example.

You are selling shoes and Google calculates that your Display Network CTR is 0.03 percent on one specific page. On that specific placement, Google sees you have three competitors getting a CTR of 0.003 percent each.

It's recommend to understand the formula so you can correctly interpret the Relative CTR. The important part is it takes an average of your competitors' CTRs, so some competitors might be very close to your CTR, while others are four or five decimal places away from beating you on a specific placement. Since the value is an average, you can’t know that.

The Relative CTR is only shown in the Campaign and Ad Groups tab. Most advertisers find it more useful in the Ad Group section because it provides somewhat more insight.

Competitive metrics give you an overall impression of how you are doing compared to your competitors. In fact, they might point out precious opportunities you would not otherwise be able to see.

Share
Christina Baldassarre
Christina Baldassarre is a Social Media Consultant and Founder of 1DollarAd.com and Zebra Advertisement, a multilingual PPC agency and Google Partners All-Stars winner. She was shortlisted by the 2014 U.S. Search Awards in the category of “Best Use of Social Media in a Search Campaign.” Her most recent article for Semrush was “5 Ways to Better Sell Your Skill Set.”