Summer has arrived, and the amount of big industry-related news has dwindled. Still, there are quite a few exciting topics to cover. The June 19 Core Update has finished rolling out, and experts started to evaluate its impact. Google Ads got a couple of neat new features, a new Rich Results Test tool update and more experiments in local search results that have been spotted by users.

Core Update Has Rolled Out

On June 8, Google's Danny Sullivan announced the completion of the core algorithm update launched on June 3rd. As always, Google is not willing to provide details on specific issues this update covered. However, during his regular webmaster hangout, John Mueller mentioned a couple of things that might be worth checking. Those include outdated content, unrecognizable authors, and stock images instead of authors' real photos. Mueller also added that Amit Singhal's article covering signs of a quality site is still relevant and can be used as a reference.

The June 2019 core update did not create a lot of SERP volatility according to different tools (including SEMrush sensor), but some sites were severely affected. For example, crypto and financial news site CCN declared it had to shut down after losing over 70% of mobile organic traffic overnight, which led to a 90% revenue drop. UK media giant Daily Mail lost over 50% of its organic traffic according to the newspaper's representative Jesus Mendez who asked for help on Google Webmasters forum.

Sources:  Early data around the Google June 2019 core update shows some winners, losers, CCN is Shutting Down after Google’s June 2019 Core Update, English Google Webmaster Central office-hours hangoutGoogle On Why You Can't Fix Core Update Issues Or Can You?

Another noteworthy update may affect larger sites that are trying to monopolize the SERPs. For now on, top 10 results show no more than 2 listings from the same domain. The goal of this update is to provide more variety of domains on SERPs, Google said in a statement; still, there will be exceptions. More than two results from the same domain may be shown in the top 10 in some cases when Google decides it is appropriate.

Some Google users noticed a new type of local pack for mobile. Instead of listings, Google showed up to 3 carousels with local companies for some queries. Here is a GIF made by Mike Blumenthal showing this new feature:

Another helpful Local Pack feature is being tested that allows users to choose an area for local search results. As Valentin Pletzer noticed, It offers several cities near the user's location to specify the search. As always, there is no official information from Google on the scale of testing. (see image 2 in the tweet below)

Google has updated the SOS alerts that are shown in the search and maps. Such alerts provide information about natural disasters, such as floods, earthquakes, hurricanes, and so on. Now, these alerts contain information about what happened, where it happened, links to news, phone rescue services, and real-time visual data, e.g., the movement of a hurricane or flood. 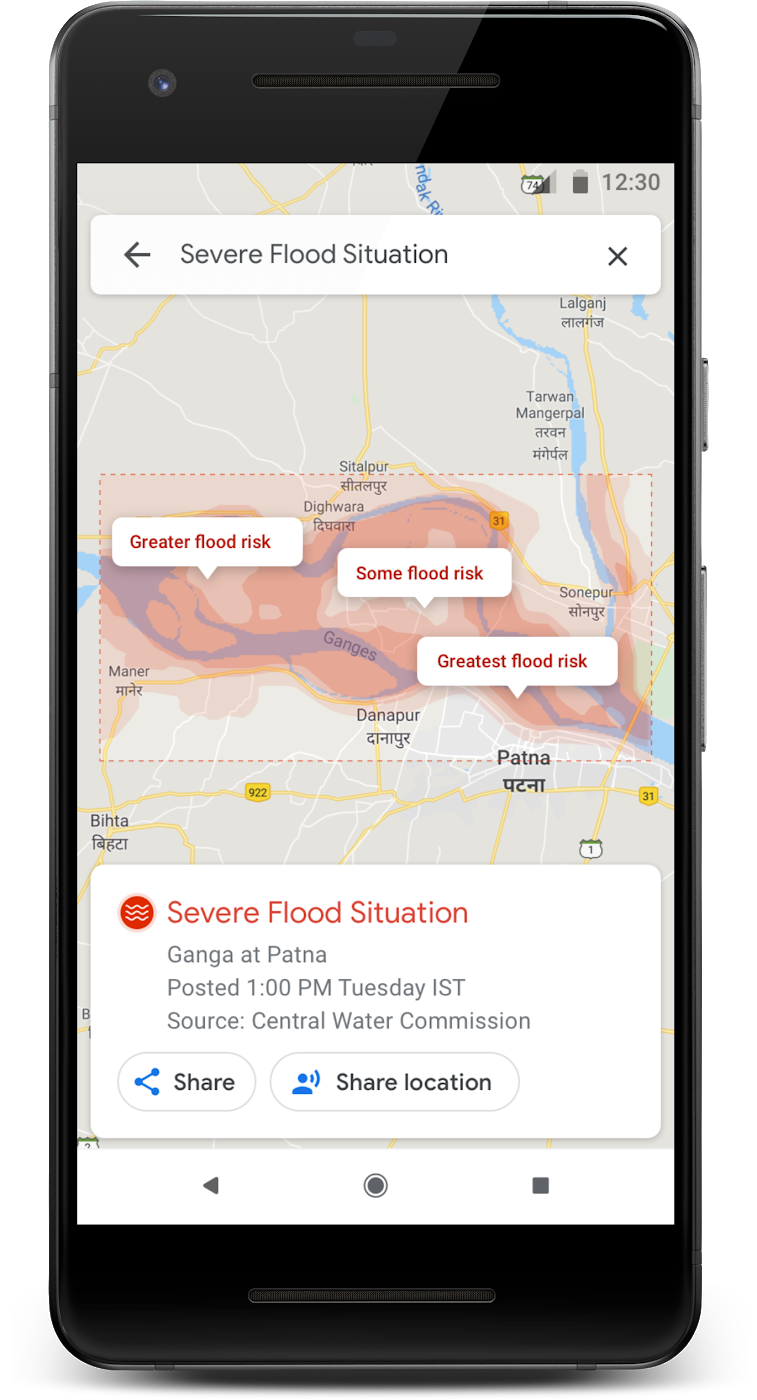 Source: Updates in Maps and Search to Help During Times of Crisis

After extensive testing, Google launched a new search menu design. Now it shows icons next to the names of Google services (video, pictures, search, maps, shopping). Apart from the new design, no other features were added.

Google Ads users now can set up campaign-level conversion for search and display campaigns. Google said, "Previously, your “Conversions” column selections applied to all campaigns in your account. This meant that if you had multiple campaigns intended to drive different goals, perhaps with independent marketing budgets, you’d need to create multiple accounts in order to optimize them separately."

Now you can choose specific conversion actions for each campaign to make sure your budgets are spent the way you want. While this feature is available for all accounts using search and display campaigns; video campaigns will be supported later this year. You can find more information on setting up campaign-level conversion in Google Help Center.

Source: Choose Which Conversion Actions to Bid For at the Campaign Level

Google is testing a new automatic extension for paid search results, which shows the advertised domain's popularity. Where Google takes this information and what exactly these figures mean — paid, general, or specific keyword traffic — is not clear. As a Google spokesperson told Search Engine Land, "We’re always testing new ways to improve our experience for our advertisers and users, but don’t have anything specific to announce right now."

Google Search Console now uses the increased default time range in the Performance report. Now it is 90 days instead of 28 days both for Search and Discover reports. With this change, it has become easier to see and analyze trends for your site over a longer period.

If you have Discover data available on your Search Console account, we are making a small tweak to the Performance report: we're changing the default time range of the Discover and Search bars to 90 full days. To learn more about Discover Analytics check https://t.co/li1n4MGibi pic.twitter.com/drun98csQp

Google has added a new feature to the Rich Results Test tool that allows you to see how Googlebot desktop or Googlebot mobile sees the structured markup on a specific web page.

Google said, "The new functionality will help you review your structured data implementation using both user agents to prepare for mobile-first indexing." As we all know, the structured data on both desktop and mobile sets need to be equal if we hope to have our website considered eligible for rich results. 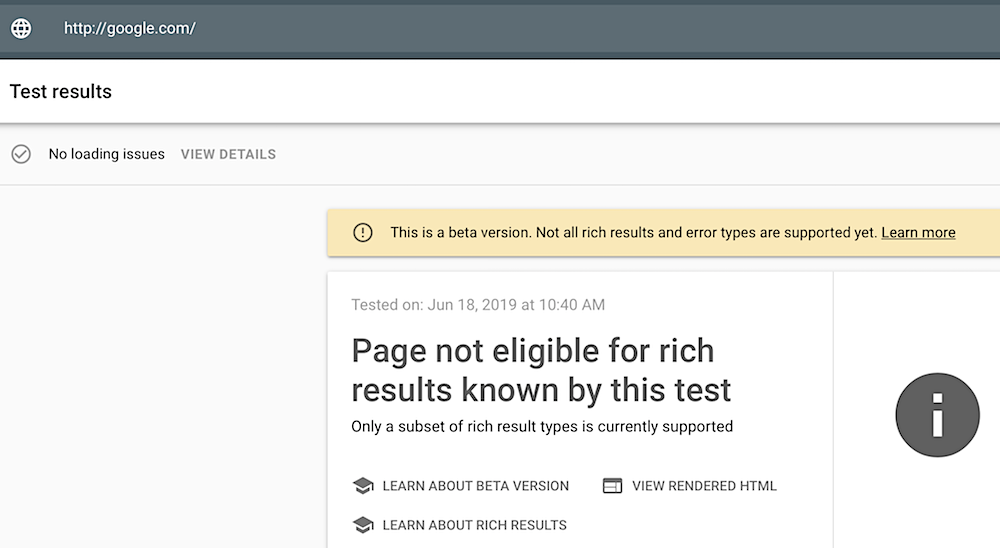 On July 1, 2019, mobile-first indexing will be the default for all new websites, but older sites need to continue to evaluate and monitor Google's best practices if they hope to be shown in rich results.

Google announced their new Webmaster Conference, which will be a series of local offline events held in different regions of the world. The goal is to provide local web creators, who are not always able to travel internationally, with an opportunity to get more information about Google Search. All these events will be "free and easily accessible in the region where they're organized." You can find information about upcoming events on the  Webmaster Conference website. As for now, a series of conferences in India and Indonesia are planned.

Source: Webmaster Conference: an Event Made for You

Martin Splitt has posted two new videos in the SEO Mythbusting series on YouTube. The first is dedicated to JavaScript. It has a lot in common with a series of videos on the same topic released a couple of months earlier on the same channel.

All videos from the SEO Mythbusting series can be viewed on the official Google Webmasters channel.

These are all the news I've got for you this time. Have a great summer and don't forget to check our digest every other Wednesday!

Judith LewisJudith is a renowned writer, trainer, blogger and a digital and media consultant specialising in applying strategic understanding of digital technologies to help businesses innovate and optimise their effectiveness within the new, networked communications environment. She is a regular speaker around the world on SEO, content strategy, link building, PPC, and digital strategy, a contributor to the Huffington Post, and has been recognised by her peers as one of the most influential people in the UK digital industry. Judith judges the MENA, EU, US and UK Search Awards, an industry leading award and has every year since their inception. She has worked with market-leading global businesses including Google, Orange, COI, NatWest/RBS, National Gallery, CIPD, Fidelity, GalaCoral, NBC Universal, Readers Digest, Bayer, Family Search, Amadeus, AMD, AmEx, TotalJobs, Virgin.com, Virgin Startup & more. She has over 20 years of experience, predating Google in her entry into the market and now runs her own consultancy. She has worked at Centaur Publishing, i-level, &amp; Beyond before setting up her own consultancy. Judith also blogs about chocolate, helps with London Girl Geek Dinners, was a founding Modern Muse, and has contributed to the book “Pimp My Site” and the Econsultancy guide to Paid Search. She is currently working on updating the Econsultancy Best Practice guide to SEO and teaches the advanced SEO course as well as the Paid Search courses.
More about SEO
Analyzing Google SERP Volatility Across 25 IndustriesWe analyzed Google SERPs across 25 industries to get an idea of what changes are occurring on SERPs on a day-to-day basis. Take a look at what we‘ve found and see what SERP features you should be targeting.