How High Can Your Facebook Ad Frequency Go and Still Convert?

We have all heard of banner blindness and ad fatigue, but in the PPC field we have come up with a few tricks to get around this. Simply insert a new background image, change up the color scheme or even reverse the text and you have practically created brand new ad copy. But what happens when your Facebook ad frequency begins to reach above 10 or even 20, how do you control your bids and keep driving conversions?

We recently ran a Facebook ad campaign for a client and found that over a five month period we had potentially reached the highest ad group frequency we had ever seen, 95.68. With a small niche audience between 400 and 1000 people, we had served the same ad to the same people about 95 times and were still driving conversions.

First, let’s discuss the importance of ad frequency in Facebook advertising and show you how our campaign continued to drive conversions with such an extraordinary frequency.

What is Ad Frequency?

(Skip ahead to the next section if you understand ad frequency.)

Users usually use three different bids for their campaigns:

Advertisements are subject to an auction where Facebook evaluates which ad will best serve its audience. The maximum bid, estimated audience actions and ad relevance all determine which ads will be served to a specific audience.

It is important to understand that measuring your CTR, CPC, CPM and Daily Unique Reach only tell advertisers how an ad is performing, not why it reached that performance level. This is why ad frequency is so valuable to a Facebook ad campaign.

Typically, Facebook advertisements tackling a horizontal market would optimally want to reach around a 1-2 ad frequency. Possessing an ad frequency of 1 and under indicates that your ads are too spread out and not reaching your target audience. An ad frequency above 4 in the newsfeed and 8 in the right ad column would usually start to suffer from banner blindness.

Facebook allows ads to be shown to the same person in the news feed twice a day, though ads have no frequency limit in the right column. Typically, as ad frequency begins to rise it results in a decreased CTR and higher CPC. 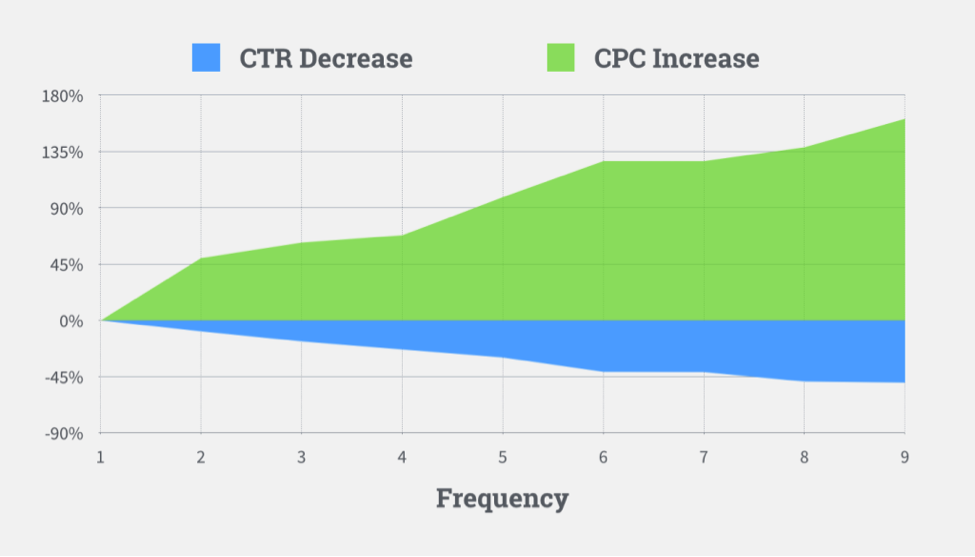 Facebook will allow frequency caps, if you are using a CPC bid, to pause campaigns that reach too high of a frequency. Adding a CPM bid to an ad group may allow an ad’s frequency to rise unlimited.

How Our Campaign Stacked Up

We ran an ad campaign for a client using two different ad groups over a five month period. We set both campaigns to auto-CPC and were targeting an audience of about 400-1000 people.

Over the period we noticed our frequency begin to climb immensely as our ad budget allowed us to serve a carousel of ads to the same people. By the end of the first month of our campaign, our frequency had already reached over 50.

With a small budget and reach, our frequency didn’t deter our campaign from driving clicks.

Throughout the total campaign, our CPC reached $2.62, while our CTR hovered below 0.50% per impression, as shown below.

Amazingly our ads still converted, even if fleshed out over a long period of time. This could be owed to our ad copy, a strong call to action, and high ad relevancy scores.

It is important to distinguish that our frequency was for a specific ad group, which featured six different ads. Interestingly, each ad in the group performed differently. Our ad with the highest frequency unsurprisingly drove the highest clicks but didn’t suffer from the lowest CTR. These factors could be owed to the ad copy itself and the behaviors of the audience.

If you are undertaking a Facebook ad campaign, you have probably had a few sleepless nights tracking your ad frequency. Our ad frequency monitored 2 different ad groups and found that possessing a high ad frequency didn’t necessarily deter our ads from driving conversions. So, let us know in the comments below, is this the highest Facebook frequency ever?

Share
Kristopher B. Jones
Kristopher B. Jones, founder of LSEO.com, is a serial entrepreneur, angel investor, and best-selling author (over 100,000 books sold). Kris was the founder and former CEO of Pepperjam, which he sold to eBay (NASDAQ - EBAY) in 2009. Kris is the managing director of KBJ Capital and has invested in companies including appekapps.com, French Girls App, iFart, VigLink, OneQube, and SpecialGuestApp.com. Kris recently appeared alongside comedian / actor Damon Wayans, Jr on Apple first TV Show called Planet of the Apps where he secured $1.5M in venture capital.