Google Penguin 4.0 Update — The Good, The Bad and The Ugly

Last Friday we shared some big news with SEOs all over the world: Google has officially announced the release of its Penguin Update 4.0. Penguin now becomes part of the core Google algorithm and runs in real time.

Before we see what impact these changes will have on the search industry, let’s take a look back.

The world first heard about the Penguin Update in April 2012. Its primary purpose was to deal with websites that had acquired links unnaturally in order to boost their rankings. After Google rolled out this update, which affected about 3.1 percent of queries, plenty of websites were subject to a Google penalty and dropped out of search as a result. Thus the rules of the game changed completely, and a whole new era in link building began.

Recovering from a Google penalty has always taken a long time, and the new version of Penguin that Google rolled out on September 23 brought about some significant changes. “Historically, the list of sites affected by Penguin was periodically refreshed at the same time. Now Penguin is real-time, so changes will be visible much faster, typically taking effect shortly after we recrawl and reindex a page,” wrote Gary Illyes on the Google Webmaster blog.

Let’s review the key features of Penguin 4.0 and see how they will affect the work of SEO specialists:

How to benefit from Penguin 4.0?

One of the reasons Penguin is so dangerous is because you will never be informed if your website is penalized. You can only assume that you were penalized by indirect signs, like a sharp drop in organic traffic or declined positions for some (or all) of your keywords, including the branded ones.

Because the updated algorithm allows you to see the results of your actions quickly, it can be a double-edge sword. The recovery process becomes faster, but so does the penalization process. Here is what you can do to protect your website from unexpected drops in rankings:

The Penguin Update and the future of link building

In general, Penguin’s “real-time” feature implies that you can recover from penalty quicker. The new update allows you to conduct various experiments with a reduced cost of error – as long as you are competent and careful.

However, this could in theory lead to savvy SEOs trying to cheat the system and manipulate SERP results again – for example, by artificially acquiring backlinks for concrete subdomains or URLs and observing Google’s reaction to their experiments. We’ve asked some experts to share their opinion if the new Penguin Update is going to lead to a new wave of grey-hat optimization.

I suspect the real-time nature will make it hard for spammers to know if they got hit by Panda, Penguin, or something else. So I am not sure if it will make it easier or harder. Time will tell.

In short, no. I do not believe that Penguin moving to the core algorithm and running in “real-time” will lead to more grey-hat optimization, for two reasons:

Even though Google uses the language “real-time” there will still be a lag time in seeing the results of newly secured links. In theory, it will only happen when Google crawls both your page and the page linking to your site.

The exact language Google used to describe the granular nature of Penguin: “Penguin now devalues spam by adjusting ranking based on spam signals, rather than affecting ranking of the whole site.”

Some SEOs have theorized that the new Penguin algorithm might simply ignore spam links, rather than enforce a punitive measure. The Penguin algorithm would affect pages more than sites, by Google’s statement. This would largely defeat negative SEO, but also further obfuscate the effect of grey hat links designed to test and manipulate Penguin.

In short, I believe it will be extremely difficult to actually measure and understand the effect of manipulative links on the Penguin algorithm. Google tends to get better over time, and I believe that this new update will continue that trend.

I think there are a couple of things to be concerned about with this new implementation of Penguin.

Google has effectively given the power to experiment (and perhaps to manipulate the algorithm) back to those who have the ability to spend time and resources on it. I see two key groups who could be likely to take advantage of this in ways that may be detrimental, both to competitors and to the general quality of the SERPs.

First, those with a penchant for pushing experimental limits in order to gain insights on the workings of Google’s core algorithm. For these people unknowns are now able to be tested, limits pushed, and SERPs impacted once again.

Perhaps more concerning is the specter of giving malicious operators the ability to really test the effectiveness of negative SEO efforts. While Google’s stated aim has always been to ensure the Penguin algorithm is immune to negative SEO, initial signs are not great. The first client to contact me after the release of the new Penguin algorithm was a business owner who had been watching massive numbers of spammy links built to his site for months, ignoring them on the advice of those who believed “Google is generally very good at identifying negative SEO”. By twenty-four hours after release, his site had taken a significant hit in visibility.

While I’m pleased to finally have a more responsive Penguin on the block, there is much to watch out for as all of this shakes out. In the meantime, we’ll continue to focus on helping those dealing with manual actions, for whom nothing changes without hard work and attention to detail.

We’re learning more and more each day with Penguin, which is awesome. I said the other day that disavowing would probably not be needed anymore, and I was right! Gary confirmed that yesterday. And then he explained that previous Penguin penalties (suppression) were being removed over the next few days. That’s HUGE news.

Anyway, I’m going to hold off until more data comes in. I’ve been heavily analyzing many domains that were previously impacted. I think the next week will be very interesting.

Although it is a bit early to evaluate this news, there are a couple of interesting aspects: the Penguin becomes part of Google core algorithm and therefore becomes a ranking factor. If it's true, it means, that as soon as someone tries to fool Google, the algorithm will immediately adjust the rankings. In Bruce Clay we are analyzing this actual impact, and we will have more data and analysis in late October.

I don’t think anything Google has ever done has stopped SEOs from finding ways to cheat the system! But yes, I can see how Penguin 4.0 could be an advantage for SEOs experimenting with artificial links. Everyone has been talking about this since Penguin 4.0 was announced, but it is too early to tell if this is really the case.

Grey-hat SEOs will certainly have to adapt their processes, black-hat SEOs too. It’s like drug use in athletics; unless you are superhuman, you know that to win you may have to artificially boost your performance, but if you get caught, your career could be over forever. The more worrying thing for me is that the granularity of Penguin 4.0 might make it easier for negative SEOs to take over SERPs for one particular keyword or micro-niche without detection.

5 common mistakes made when disavowing links

I’ve already pointed out that being real-time Penguin 4.0. makes it absolutely essential to regularly monitor your backlinks and get rid of dangerous ones. We’ve analyzed 30 000 campaigns created in the SEMrush Backlink Audit tool in order to see how SEOs disavow links and identify their most common mistakes.

21 percent of disavow files we’ve researched do not comply with Google Search Console rules. Let’s look at the most frequently made mistakes: 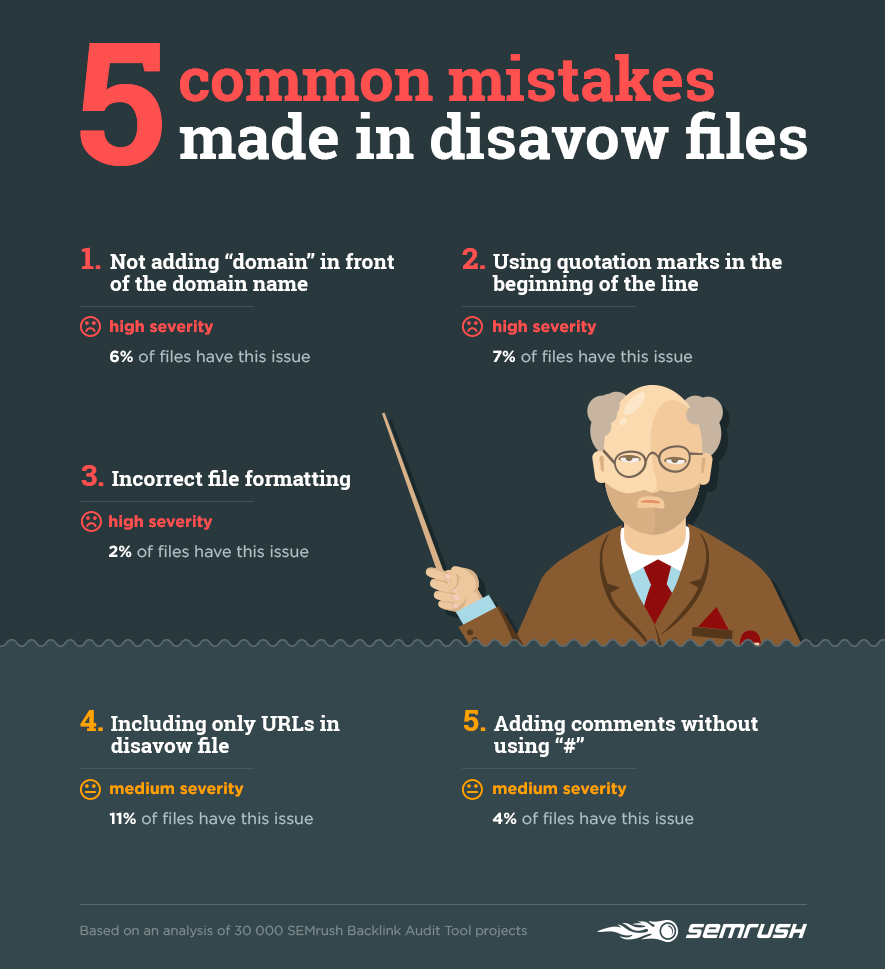 Google only recognizes lines that begin with http or domain. If you write www.domain.com, Google will ignore this line and won’t disavow it.

2) Using quotation marks in the beginning of a line

Again, Google will simply ignore a line that begins with anything except http or domain.

Using an incorrect line separator in some tools may result in multi-line data being merged into a single line. Google will not be able to recognize the file correctly and apply disavow rules.

4) Including only URLs in disavow file

Sometimes a link from a single article can appear on a few other pages of a website – say, pages featuring top posts of the month, posts by category etc. So if you want to ensure Google is not taking into account the connection between your website and a specific website, disavowing a particular URL is not enough. You need to disavow this entire domain.

Commenting on your disavow file is not obligatory. However, if you decide to provide additional information, make sure it doesn’t prevent Google from parsing your file.

After uploading your disavow file, always check to see how many lines Google recognized correctly. If the number doesn’t match the number of lines in your request, check the file for compliance with GSC’s rules.

We recommend you to start auditing your backlink profile as soon as possible and get used to doing it regularly.

Anastasia SidkoAnastasia Sidko, Content Manager at Semrush. I have four years of experience in content creation and public relations. My areas of interest include SEO, digital marketing and content marketing.