To say voice search is the new buzz term in SEO would be somewhat of an understatement. It almost seems as if every digital marketer has it on their radar, with the industry as a whole still trying to formulate how best to exploit this fledgling technology. One thing that is indisputable is that voice search is here to stay, given that there are reported to be 118 million smart speakers now operating in US homes.

It is believed that today, two in five adults now use voice search at least once per day, and by 2020 it is estimated by many experts that half of all searches will have shifted from the keyboard to the microphone.

Google revealed that 20% of searches through the Android Google App are now voice searches, and with the company recently announcing that its new version of Google Assistant (due to be released later in the year) it will be 10 times faster than its current version. That combined with the fact that voice search recognition is now at a point of 95% accuracy, it only makes sense that as consumers, we are moving towards the technology more and more.

Many experts have made predictions on how the market will develop over the coming years, with various percentages wowing us with the millions of potential dollars it could all be worth in the future. And while we all digest these predictions on the future market value of voice search as a whole, one thing is for sure — it can’t be ignored by those working in search marketing. The search landscape is shifting whether we like it or not, which means marketers need to ensure they are keeping fully abreast of how this change will impact the performance of their campaigns.

With voice search so hotly discussed and debated this year, we decided to produce a study of our own.

Our comprehensive study was lead with two explicit objectives:

We made it our mission to find out the most essential ranking factors behind voice search as well as uncovering what influences Google Assistant to choose one answer over the rest of the results in SERPs.

Our findings are the product of an in-depth analysis of over 50,000 questions asked to three devices combined. Using queries pulled from SEMrush’s API (as well as a series of automated voice queries), we recorded the SERPs from each query and then analyzed several different factors including the readability, page speed, number of backlinks, and SERP features (amongst others) to determine which factors are the most influential when it comes to ranking for voice search queries.

The same process and analysis were then carried out on three separate devices (Google Home, Google Home Mini and the Xiaomi Redmi 6) using Google Assistant; with all three set to the same location to get a conclusive answer.

You can view full details on the methods behind the study in our Methodology report. You can find this by clicking here.

Below are the key findings from our research:

One thing we discovered almost immediately was that 97% of answers provided by Google Assistant are results that rank in the top 10 organic results. Therefore an existing first-page ranking is nearly a prerequisite for ranking for voice search queries.

We split our findings into seven key areas:

Once all the questions were gathered (both manually and by using SEMrush’s API), they were then constructed and curated using three separate methods. Common questions were among those selected, such as “What should I see in Portugal?”, while questions were also created from lists (as well as general questions using popular keywords).

We found that the average word count of an answer from voice search was 41.4, with similar word counts reported across all three devices: 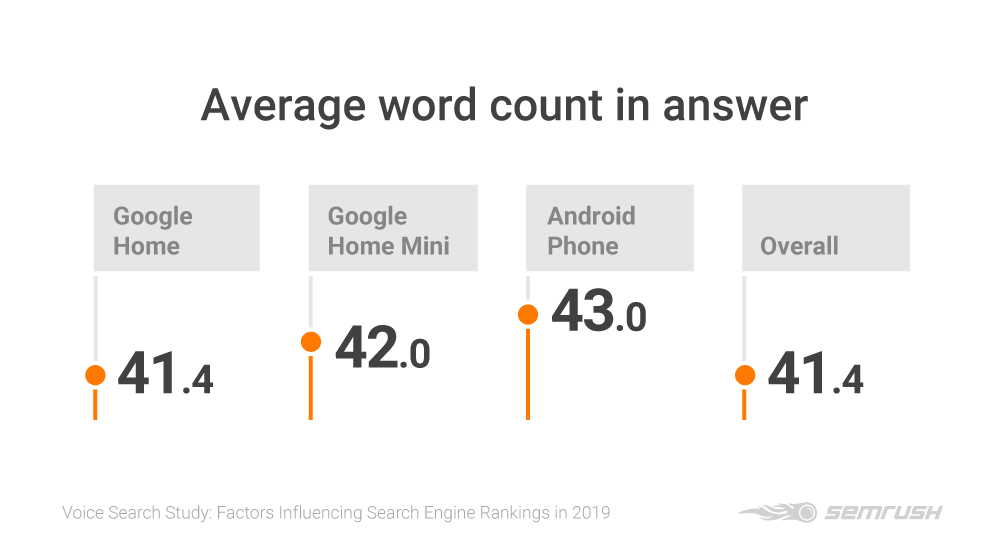 Overall across all three devices, around a quarter of answers were ranked in position two, while on average only 14.2% of results resided outside of the top four positions.

Alongside 78% of voice search results ranking in the top three, the majority of queries returned an answer occupying a SERP feature result. In total, 68.5% of answers came from a SERP feature, with Featured Snippets being the most commonly found in Google Home and Google Home Mini, in particular.

Over 60% of results from Google Home were ranking as Featured Snippets in all, a significantly higher number than compared to Android (41%).

In a number of cases, we found answers from the home speaker devices (Google Home and HomeMini) were returning results from the Featured Snippet position. However, when the same queries were conducted using the Android device, the answers produced was not taken from a SERP feature. Example queries included….“Which country is the largest producer of Apple?” and “What Should I See in Portugal”.

Interestingly, while the number of Featured Snippet results within Android are 20% lower than Google Home devices, there was an increase in the number of results occupying a People Also Ask feature.

Around one in five Android voice search queries with SERP features returned answers ranking in a People Also Ask position, while just over one in 10 of searches made via Google Home and Home Mini produce the same result.

There were also many queries where Google Home and Home Mini delivered a Featured Snippet result, but the People Always Ask result was delivered on the Android device; this was the case for results including a number of searches revolving around “which country” questions.

Sometimes overlooked in SEO is the readability score of the page you are trying to rank. Of course, you can cram a page with target keywords, but what search engines are looking for is well structured, well-written content that ultimately matches the intent of the query.

Within our study, we used a range of different metrics and tools to analyze the readability of results and found that, in general, voice search answers are simple to understand, with the average 15-year-old able to comprehend the answer returned.

We ran all answers through the Dale Chall readability test as well as the Flesch Kincaid Grade system, finding in the case of the latter, 80% of Americans would be able to understand/read the applicable answers.

This trend proved consistent across the board, with the only noticeable difference between the three devices being the fact that Android results generally had a lower difficulty of words, perhaps due to answers being both visual and audible.

Google has long signaled that page speed is one of the key factors within its ranking algorithm and that pages with faster loading times have a distinct advantage over competing pages that load less quickly.

Of course, a wide range of queries will have a wide range of loading times, given that different types of content could be returned (videos, images, text, etc.). However, all answers across all devices were consistent in having quicker page load time compared to the non-answers in each SERP (on average).

Below you will find the percentage of voice search answers that perform more quickly than the remainder of the top 10 in the SERP for specific key metrics.

Across every metric, the lion’s share of voice search answers performs better than the average of the top 10 non-answers, with Estimate Input Latency particularly noticeable at 70%.

First Paint score also appears as a key metric within voice search, with quicker primary content load speeds more likely to earn voice search recognition as ultimately it will relay the information back to the user more quickly.

Time-to-first-byte also appears to be one of the most critical influences with the speed index metric showing less prominent results, but still providing a strong indication that a faster page is beneficial.

Below is a table representing the queries with the greatest disparity between answers and non-answers.

As you can see from the above data, pagespeed performance is one of the key points to address when optimizing for voice search. In some cases, voice search results were over 10 times faster than the average of non-answers.

From the results, the importance of pagespeed does seem to be slightly more relevant to Google Home and Home Mini in comparison to Android, which is most likely because the latter is still required to load visual page elements alongside voice search results.

Our backlink analysis of voice search answers provides one of the most interesting contrasts across the three devices, with keywords in backlink anchors and page titles much more prevalent in Google Home and Mini results than Android.

Over 50% of answers with Google Home and Mini had backlinks with an anchor that appeared in the question, compared to less than 45% in the remainder of the top 10 results in the SERP. However, with Android, that figure is below the remaining average, signifying a lack of relevance in the case of smartphone devices.

This was also the case with regards to keywords in the query appearing in the title of an answer’s page. A significantly higher percentage of keywords were found in Google Home and Mini answers compared to the rest of the SERP. In the case of Android, the findings were again inconclusive.

As you might expect from the above, page score and trust score were found to be favored by answers returned from Google Assistant, although answers from all three only offer a slight increase on the rest of the top 10 average of non-answers.

Our Schema findings were difficult to draw a definitive conclusion from. While the majority of answer sources did indeed use schema, the type distribution failed to indicate a clear winner over which type of schema would most likely influence an answer being selected from the SERP.

Equally, HTTPS and URL depth also proved inconclusive, largely due to the fact that Google is already encouraging sites to adopt HTTPS and therefore the majority of results within the top 10, and beyond, had already added that extra layer of security.

In fact, of the queries in our study, 90% of results in the top 20 had already converted to HTTPS, proving it a vital factor for ranking well, and hugely relevant if your site has yet to do so. 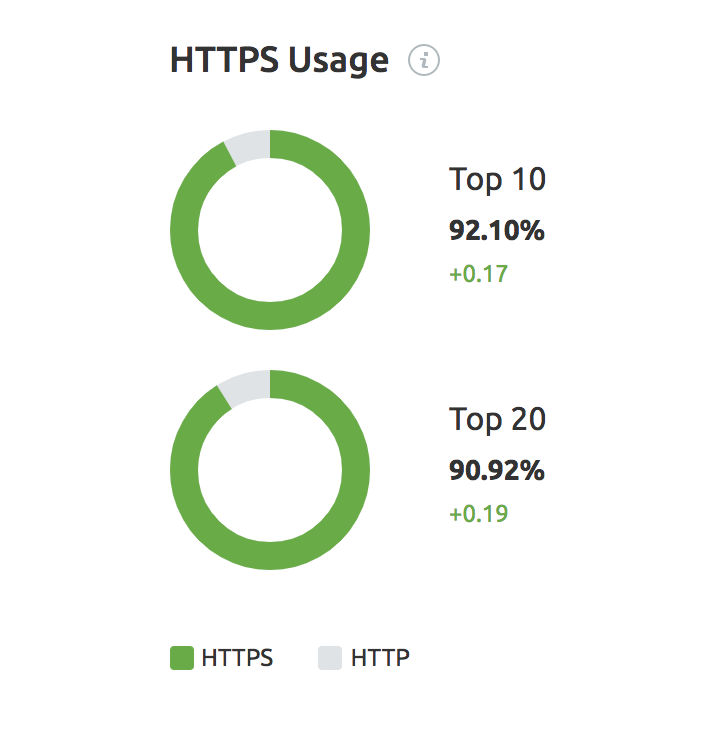 It is clear that the main factors that influence the answers Google Assistant returns from a voice search queries are pagespeed, ranking in the top three results and, in particular, occupying a Featured Snippet position.

By understanding and acting upon our 10 key findings, marketers should be able to return more answers from voice searches.

With an increasing number of searches on the Android Google App now voice specific, and 55% of US households set to own a smart speaker by 2022, it is vital to adopt a voice search marketing strategy sooner rather than later to stay ahead of the game.

Share
Olga Andrienko
Together with her team she has built one of the strongest international communities in the online marketing industry. Olga has expanded Semrush brand visibility worldwide entering the markets of over 50 countries. In 2018 Olga was mentioned among the 25 most influential women in digital marketing by TopRank. She speaks at major marketing conferences and her quotes on user behavior appear in media such as Business Insider and Washington Post.