In recent years, the emergence of social media, the emphasis placed on page speed optimization, and the use of structured data and rich snippets have changed the game a bit.

Gazing into the future, we will say SEO practitioners and business owners may need to entirely re-think how they approach using images and image optimization. But before breaking down the past, present and future of SEO for images, it’s worth looking at why this subject is an important one, and perhaps far more critical for some industries than they may realize.

Businesses like accounting software companies or psychotherapists probably place a limited emphasis of image results in search engines. Their offerings are not highly visual, and text is a good medium for conveying their messages.

Alternatively, businesses like jewelers selling cufflinks, or a local business specializing in custom signage must be very aware of their presence in the image results of Google, Yahoo, and Bing. If they aren’t, they’re missing a lot of potential market share. With product offerings that are largely in demand based upon their visual appeal, a strong organic presence in the image results can mean significant traffic.

Consider the following about traffic

Using SEMrush, I looked at the organic traffic data for a local signage provider I’d done some consulting for in the past. According to the data, over 85% of the keywords they rank for in Google feature image results on the 1st page.

Using SEMrush to analyze the organic traffic data for a nationwide provider of men’s cufflinks and accessories, a similar trend emerged.

Out of over 5,600 keywords in the index for which the website appears to be ranking, over 84% of the SERPs feature image results.

In 2007, Matt Cutts of Google discussed the vital importance of alt text in the following video featured on Google’s primary page about image publishing guidelines.

Remarkably, both the advice in that video and on the support page from Google remain very relevant for proper image optimization today. Among the techniques mentioned by Cutts and Google that still apply today are the following:

Today there are a number of new wrinkles one has to consider when pursuing image optimization, though I would classify these as additions to the old best practices rather than considering the to be any kind of paradigm shift.

While not an exhaustive list, I would suggest the following three items to audit and address when thinking out optimizing images for SEO by today’s standards.

Back in April of 2010, Google released a memo on the Webmaster Blog educating website owners on the important of speed on the web. The following sentence in the 2nd paragraph of that memo brought speed to the forefront of SEO overnight. It reads, “Like us, our users place a lot of value in speed — that's why we've decided to take site speed into account in our search rankings.”

From the perspective of SEO for images, speed can be enhanced in a couple of basic ways. First, use tools like PhotoShop or a variety of free online tools to “compress” your image size. In a nutshell, image quality can often be dramatically reduced leading to a much smaller file size, with very little or no visible impact to the human eye.

Second, crop your images down to a reasonable size. Many phones and digital cameras take photos that are 1000’s of pixels wide and tall. The resulting 5mb monster image must be fully loaded and subsequently re-sized by a browser to display on a screen. This is bad for user experience and SEO.

Use Open Graph (OG) Protocol tags on your posts and pages to associate a primary image with your content for sharing on Facebook, LinkedIn, or Twitter. By properly configuring the tags, you can control the thumbnail embedded in social shares of your content around the web.Note the example below: 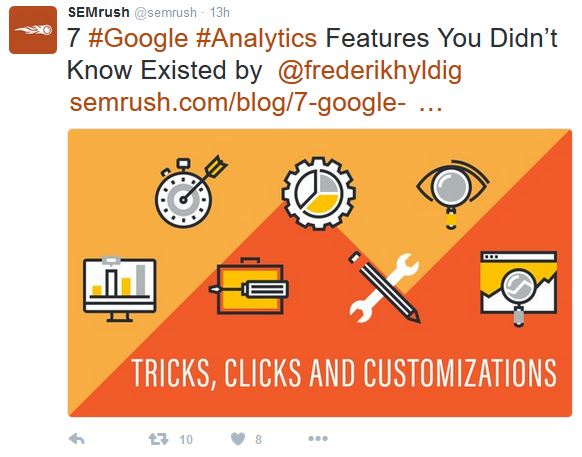 This association between content and image can further improve the relevance and ranking of your image for a particular keyword. There are many good resources for specifics on OG tag configuration online, including this post from Hubspot.

Use XML sitemaps for images

Just as webmasters can specify the location of all pages and posts they wish to have indexed by searches through the submission of XML sitemaps, the same can be done with images. There are two options for doing this. The first option is to create a dedicated XML sitemap for images, and the second option is to simply add image information to and existing sitemap.

According to Google’s guidelines, “Image sitemap information helps Google discover images that we might not otherwise find (such as images your site reaches with JavaScript code), and allows you to indicate images on your site that you want Google to crawl and index.”

Many popular XML sitemap plugins (such as Yoast SEO for Wordpress) automatically include images, but check your current site configuration to be sure. To confirm that image URLs are being submitted with your sitemap information, check the configuration in Webmaster Tools. You should see them appear something like this: 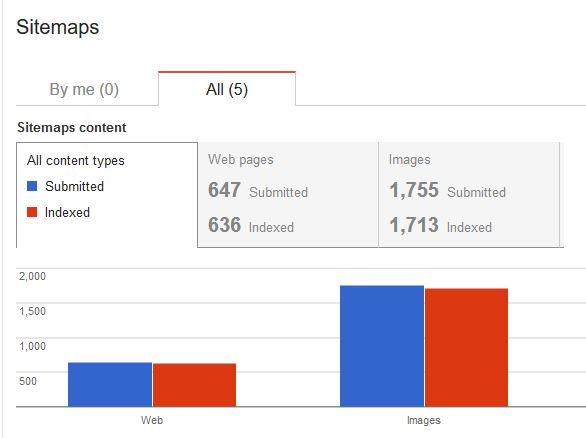 The Future of Image Optimization

What does the future have in store for image optimization? With concepts such as image recognition software and machine learning becoming a reality, it is possible that the old reality of search engines relying on alt attributes and other signals may disappear.

A recent article discussing generative design and Autodesk’s ‘Dreamcatcher’ research project offers a glimpse into what is now possible with image recognition. Of particular interest was the following:

“The labels on the photographs below were generated automatically by a computer. It was shown millions and millions of images as a training set, and now it knows how to label things it has never seen before.” 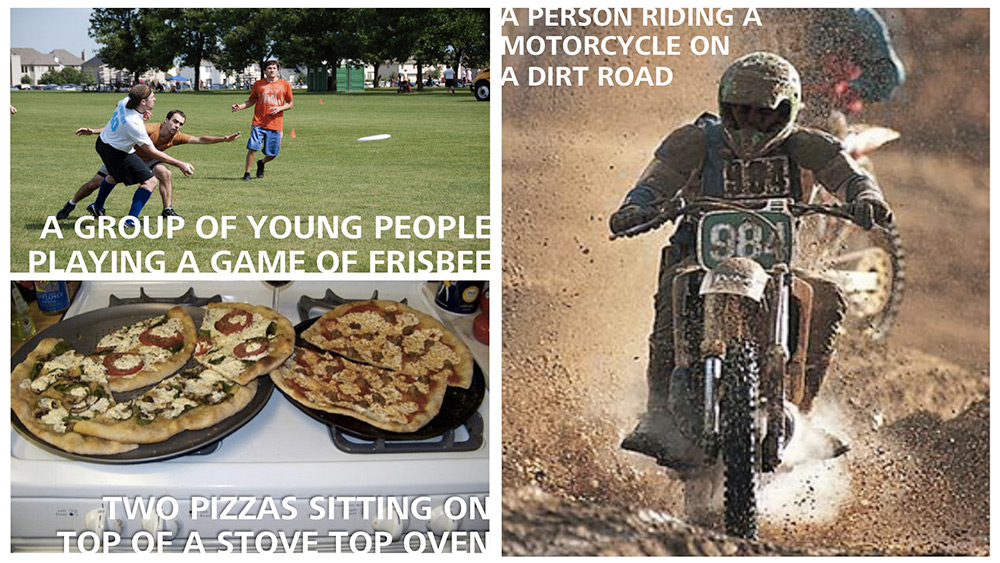 Google appears to have their own initiatives for machine learning and image recognition equally, if not more, advanced already. A quick glance at their Cloud Vision API suggests a platform with the ability to classify “images into thousands of categories, detect individual objects and faces within images, and find and read printed words contained within images.”

Could the vast troves of data being acquired from such processes be used as part of their image recognition efforts? 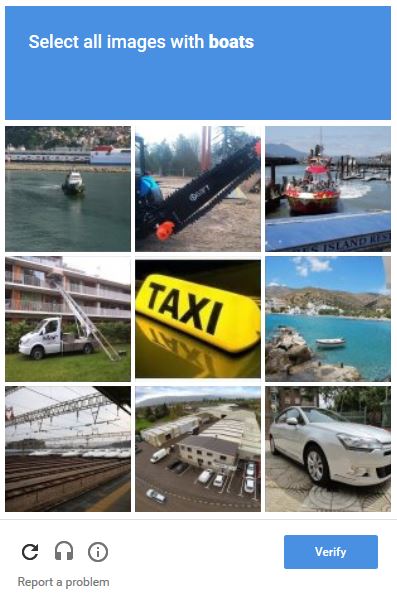 How to Stay Ahead of Upcoming Changes

In light of Google’s recent inroads with machine learning (think “RankBrain” and more), the possibility of automated image recognition across their algorithm seems much less far-fetched than in did several years ago.In a world where search engines actually can process and understand the images embedded on websites without solely relying on alt tags, file names, or surrounding text, here are some best practices worth keeping in mind.

The alt attribute probably will be around for a long time to come. However, arbitrarily using keywords within the alt attribute simply for SEO purposes could become quite dangerous as search engines become more capable of recognizing alt tags that don’t appear to have any relevance to the images they are attached to.

I’ve often been guilty of lazily selecting a stock image to attach to an article, with little thought as to “does this image add any value to the content.” More often than not, the image is just thrown in because well, the article needs an image right?

In light of possible changes to search engine algorithms, and more importantly, because it’s just good practice for engaging readers, put more effort into choosing high quality, relevant, and useful images that enhance content. Following today’s best practices, and keeping one eye on what the future might bring, helps publishers and webmasters stay one step ahead of the competition and reap the benefits of well-executed image optimization.

Andrew ArmstrongAndrew Armstrong is the founder and CEO of KickStart Search. In April of 2015, he facilitated the sale of the majority of KickStart’s assets to Wpromote of Los Angeles. Today Andrew provides specialized SEO consulting for a small portfolio of clients concentrated in the San Francisco Bay Area. Follow him on Twitter.
More about SEO

What Are Featured Snippets (How Do You Get Them)?

In this guide, we’ll discuss the importance of featured snippets and offer ways to improve your chances of ranking at the top of Google.

How To Perform a Technical SEO Audit in 15 Steps

From indexation and crawlability issues to handling any structured data errors, it‘s important to ensure your website is working properly. In this guide, we‘ll show you how to do a technical SEO audit and how to fix issues you come across. Plus, we‘ll cover a bit about how our Site Audit Tool can help.

The Anatomy of the Perfect SEO Report

SEO reporting can be a complex task: from the metrics you should include to how often you should update it, an SEO report can take up a lot of your time. In this guide, our goal is to help you to understand what a perfect SEO report should look like and what it should include, helping you to take your reporting to the next level.

What Are Rich Snippets (How Do You Get Them)?

Rich snippets can help draw the eye of searchers and encourage them to click. Here’s what you need to know about ranking for a rich snippet.

Industry Shifts, Online Stats & Surefire Insights for Digital Marketing Growth. In this turbulence-proof ebook, we highlight the industries that made the smoothest transition to online. You’ll see...
View more