“Our domain has gone from 0 to 100 within a year, and Semrush has been the all-around toolbox carrying us through the process.”
Anabel Hafstad, SEO specialist, Codex Advokat

Codex Advokat is an innovative Norwegian law firm, with headquarters based in Oslo. The firm has in recent years gained public recognition for its initiatives to push legal discourse around sustainability and climate issues beyond its own corporate walls. With over 50 lawyers on its growing team, Codex Advokat specializes in a series of legal fields rooted in both corporate law as well as private law.

In the past couple of years, Codex has - apart from its efforts to push climate issues - focused intensely on rebranding itself, personalizing its tone and message to potential and existing clients.

This has also been reflected in a radical relaunch and redesign of its corporate website, Codex.no, in March 2020. Any aspect of the company’s online business profile was scrutinized in the process and, if deemed too old-fashioned (for example its generic imagery or its heavy use of the traditional, dark-blue hues in their branding colors), changed to a more airy, personal and approachable alternative (now a friendly light beige and white). The migration also involved a change of the domain’s CMS.

Codex’ homepage and main article, old design
Codex’ homepage and main article, new design
A further goal was to aggressively boost the domain’s organic visibility for legal (and therefore business-relevant) keywords to the maximum within a single (pretty intense) year after the relaunch. A number of Semrush tools were used strategically to plan and execute the organic push effort.
Now, in the spring of 2021, Codex can look back on an intense and intensely successful upward trajectory.

At the time of the relaunch in March 2020, Semrush’s visibility graph for the domain Codex.no (monitoring roughly 700 keywords) sat at roughly 1%.

Only one year later, the domain’s visibility - as measured by Semrush’s Position Tracking tool - is coming in at 20%, with more than half of the monitored keywords ranking in the top 10 SERP results.

Visibility trend, February 2020 to May 2021
How was this feat achieved?

Perhaps ahead of its competitors within the legal industry, Codex Advokat has been employing its own full-time in-house SEO specialist, Anabel Hafstad, for nearly three years. Her role has been instrumental in supervising the technical challenges of the domain’s CMS migration as well as the design relaunch. She has also, along with the firm’s marketing manager John Brenne, been the strategic lead for the company’s one-year project of boosting organic visibility as far as internal resources would allow.

On a purely operative level, the company decided to involve all of its lawyers - no matter their rank - in intensive sprints of content production, spanning across multiple months in 2020. In addition, extra copywriting help was hired to complete the feat. The goal was to produce as many high-quality (and thus high-ranking) articles on legal issues as humanly possible within the given time frame of about one year.

If you belong to the impatient kind and are wondering what that means in actual numbers, the answer is: more than 500.

Every single one of these 500 new articles was written with a keen eye on Google’s notorious (and notoriously reticent) emphasis on ‘great content.’ This meant that all involved lawyers and supporting copywriters had to be taught a basic understanding of SEO and UX.

“It wasn’t always an intuitive process for our lawyers,” Anabel recalls. “People go to law school for years to make sense of the complex jargon that frames legal systems. Attorneys are used to understanding - and writing - extremely dense texts, traditionally making heavy use of professional terminology and a lot of commas and embedded clauses.”

The lawyers were, step by step, taught about digital best practices concerning anything from the article’s overall tone (personal, please), complexity level (understandable…), structure (no tab-free one-page paragraphs), to the frequent use of headings and subheadings containing predetermined keywords, etc.

This joint in-house effort meant that Codex was able to launch the new design complete with roughly 160 in-depth articles on important legal matters across all of the company’s fields of expertise (prior to the launch the domain had only had perhaps a dozen landing pages, most of which qualified as thin content).

From the beginning to the end of this process, Anabel relied on pretty much any Semrush tool that seemed relevant to the success of this journey, beginning with the Keyword Magic Tool and ending with the platform’s reliable and detailed Position Tracking report (which of course continues to be a central part of her daily work as an SEO) as well as regular technical health checks performed with the platform’s extremely useful Site Audit - something coming especially handy during and after critical moments of the site migration.

A look at the keyword research performed in Semrush: the word “oppsigelse” means “resignation” or “notice” in Norwegian. The search was performed with the firm’s labor law department in mind, and helped deepen the understanding of what a thorough article centering around the termination of employment should ideally focus on.

For example, the search phrase “Hvordan skrive oppsigelse?” (“How to write a letter of resignation?”) convinced Anabel that the article should provide an actual, step-by-step guide to what a letter of resignation should contain. Thanks to the tool’s suggestion of “oppsigelse mal” (“resignation example” or “resignation template”), the article now also offers a downloadable template - something that generates hundreds of marketable leads via the email sign-up form that has to be filled out to obtain the template.

Codex’s Semrush Site Audit Overview
Not an overall top score, but the tool makes it easy to identify possible culprits. When choosing the “issues tab”, it becomes evident that the site currently has a robots.txt problem - in this case a smaller issue that is classified by Semrush as a warning, not an error, and is a more or less easy fix. Still, Semrush helps identify even these smaller issues - without the help of Site Audit, things have a habit of piling up, generating a lot of technical debt over time. For those who aren’t at home on the techie side of SEO, the tool explains how to fix whichever warnings or errors pop up.

Round 2 - Summer 2020: Strengthening the domain’s authority

Directly after the first round, a second round of about the same number of articles (approx. another 150) was pushed in summer 2020 - this time focusing strategically on long-tail keywords related to the now-existing core articles.

In other words, the organic skeleton of the website’s already substantial content hubs received a layer of meat and muscle in the form of sub-articles that helped to deepen and strengthen the domain’s authority on legal subjects on the Norwegian SERPs.

In this round, particular attention was paid to avoiding keyword cannibalization with regard to the already existing articles from the first round. The freshly-launched “Cannibalization” overview in Semrush’s Position Tracking report came in handy, as it helped Anabel to keep an eye on the continuously growing, deepening and diversifying knowledge base the Codex lawyers were now avidly providing for an increasing number of users.

Thus, content cannibalization has been kept if not at optimal level, then at least at a tolerable 91% percent - which seems reasonable, considering the fact that the number of articles on the domain has, over the last year, simply exploded.

Perhaps, Anabel says, she will take a shot at optimizing that rate in a future round - with the help of Semrush’s watchful cannibalization-eyes.

A third phase of heightened content production was initiated in the fall / winter of 2020.

For this third and final round of the company’s online visibility project, Anabel felt a bit as if she were putting on her digital detective hat, scouring the company’s largest organic competitors thoroughly by using two of those Semrush tools that feel, in a fun sense, a little sneaky and undercover: the Organic Research and Keyword Gap tools that can be found in the “Competitive Research” section of the platform’s toolbox.

One of the domain’s toughest competitors within labor law, seen through Semrush’s Organic Research tool. This is a public domain competing for the shortest high-volume keywords in the market, but with the help of an in-depth competitor analysis, Codex has been able to take up a significant amount of visibility on keywords where public domains previously had an almost complete monopoly.

A search with the Keyword Gap tool reveals which competitors rank higher for keywords they have in common with Codex. This makes it easy to identify landing pages that need to be optimized in order to outrank competitors in the future.

With the help of these two tools, Anabel has been able to identify those niche topics that Codex had previously overlooked, while competitors clearly hadn’t. This analysis has helped create a long-term strategy to secure the domain, and thus the company further in the coming months.

The reward of this massive joint effort followed immediately.

After the first round, visibility shot up quickly. Within a few weeks, the domain’s visibility climbed from roughly 1% in March 2020 to around 9% in May of the same year - as visualized beautifully by Semrush’s graph.

Traffic, of course, followed suit. From mid-March (launch) to the end of May, traffic increased instantly, with a weekly average of +170% YoY.

One year later, the domain’s visibility continues its steady climb.

Codex.no is now nearing 20% visibility for the 688 keywords that are being tracked. Average position has improved by 70 positions. More than half of the monitored keywords rank somewhere on page 1 of the SERPs. 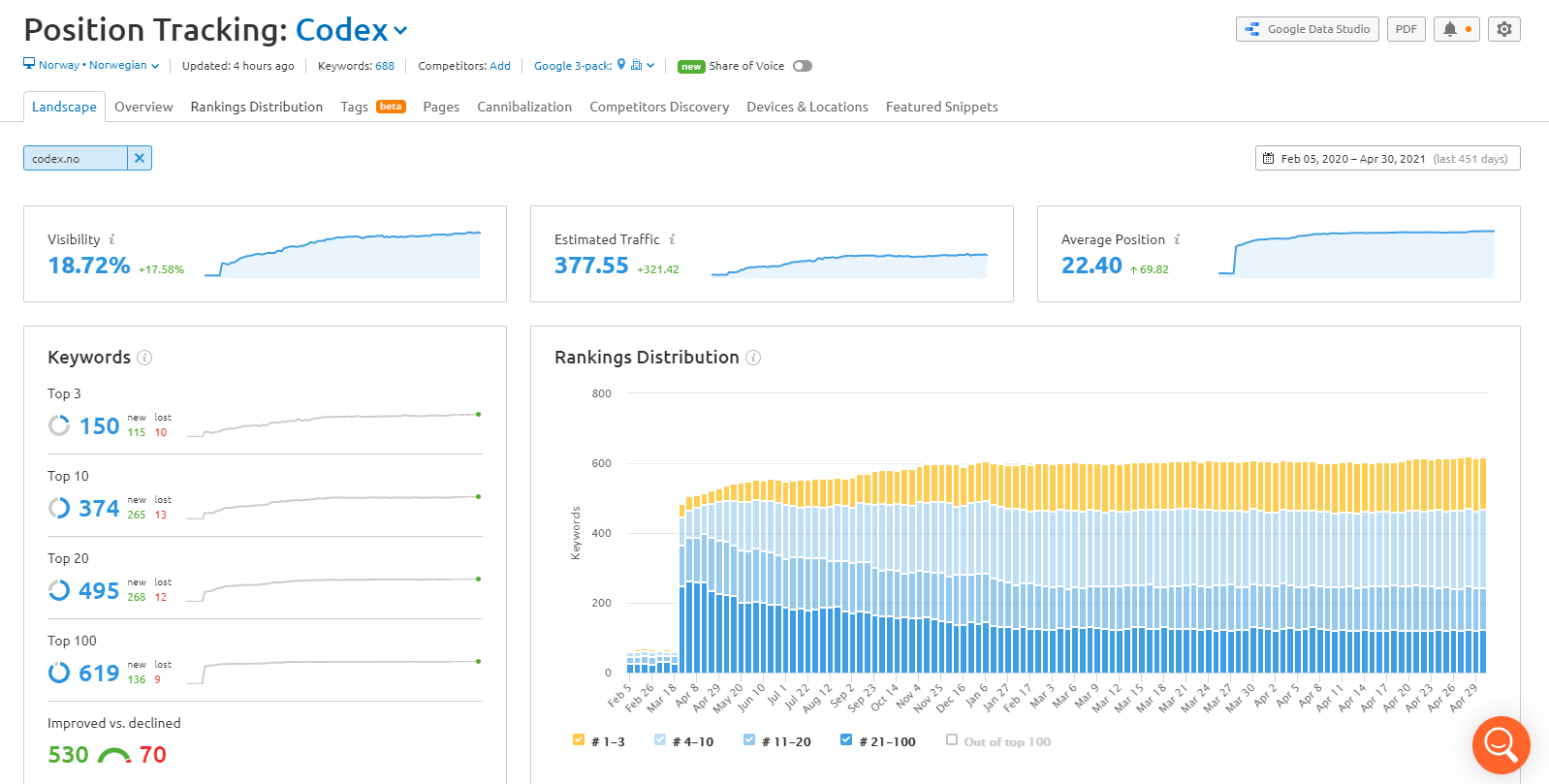 Org. sessions, February 2020-April 2021 (blue), vs. February 2019-April 2020
As for conversions, which in the end is the KPI that matters most to employees, partners and management alike… Prior to the relaunch, the Codex domain had a CR of precisely 0%, the now sizable flow of new incoming client requests equals an increase of, obviously, 100%. (No worries, Codex runs several other domains that have secured its business even before the relaunch of Codex.no).
The domain is now rivaling the company’s other websites in terms of traffic as well as conversion numbers, and has thus succeeded in becoming a stable source of additional legal cases that may otherwise not have found their way into the hands of the company’s talented and open-minded lawyers.
Find more success stories