Smileworks is Liverpool’s most popular dental practice providing dental and medical aesthetics to health-conscious and committed patients. The business has grown in less than four years from nothing to a turnover of £3.5M making it not only the most popular but the largest practice in Liverpool. Being the fastest growing independent dental practice in the UK they have plans to double in size.

Back in 2014, Ed Challinor and Dr. MJ Rowland-Warmann set out to establish a privately owned dental practice. They had all the right resources: expert dentists, a niche in the market, and the drive to learn how the business works.
Ed quickly learned paid media and getting new patients seemed easy at first. However, as time went on: “I wrote and wrote brilliant content that was original but nobody seemed to want to read it. I had about 980 users a month and that was definitely not enough.”
Outbound marketing was becoming more and more inefficient: “Our outbound strategy involved leads from PPC and Facebook that would land in a sales software system and the ladies on the front of house would need to spend hours of their day almost cold calling these people who had given up their details in exchange for lead magnets and infographics etc.” These were not the committed patients the business needed; they were just showing a passing interest. It put enormous strain on the front of house and people began to leave.
Ed even trailed a sales manager but it still led to patients who the clinical teams felt didn’t really want to be at the practice.
At that point, he realized that the website needed to be optimized and carefully crafted with the users and engines in mind.
It was a revelation that what patients really wanted was not outbound but inbound. “People want to search and buy on their own terms – not be sold to,” emphasizes Ed. “Our outbound marketing costs at one point were £5,000 on paid media and £700 per month on a PPC agency. Then there was the front-of-house time, sales manager salary, and 20-30% conversion rates from bookings to clinical treatments. We were barely breaking even.”
This is where SEO came into play.

Before doing anything else, Ed realized that Smileworks needed a strong foundation for future SEO efforts—and having a healthy well-optimized site would get them there.
Back in June 2017, Smileworks turned to Semrush’s Site Audit tool and ran its first audit, fixing any issue that might affect their site’s organic performance. 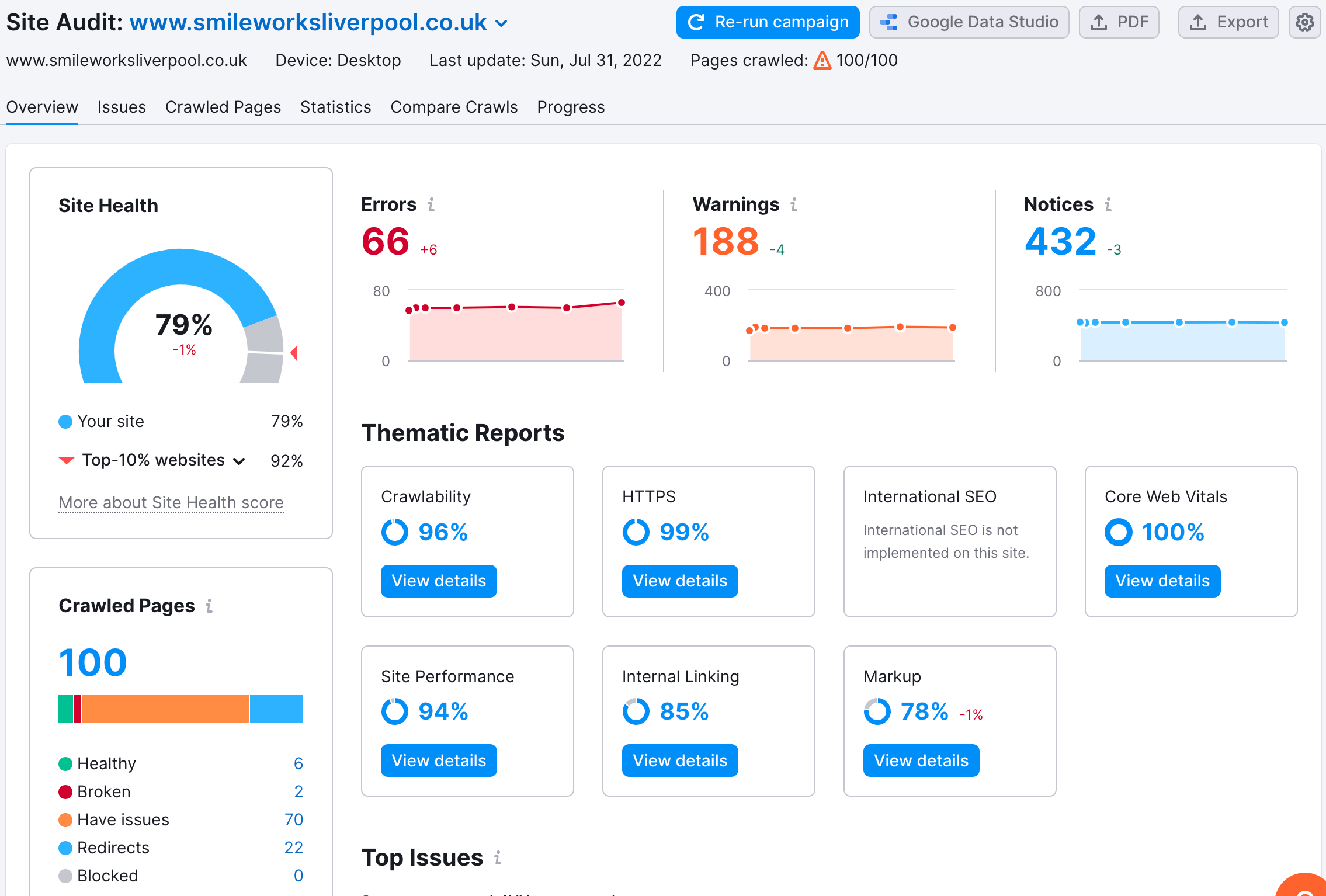 The tool crawls the website much like a Googlebot and flags problems with site speed, internal linking, crawlability, and others that can negatively affect the site’s chances to rank high on Google.
It then displays a list of the issues ordered by priority (errors, warnings, and notices) so that Ed can resolve the most important ones first every time he runs an audit. 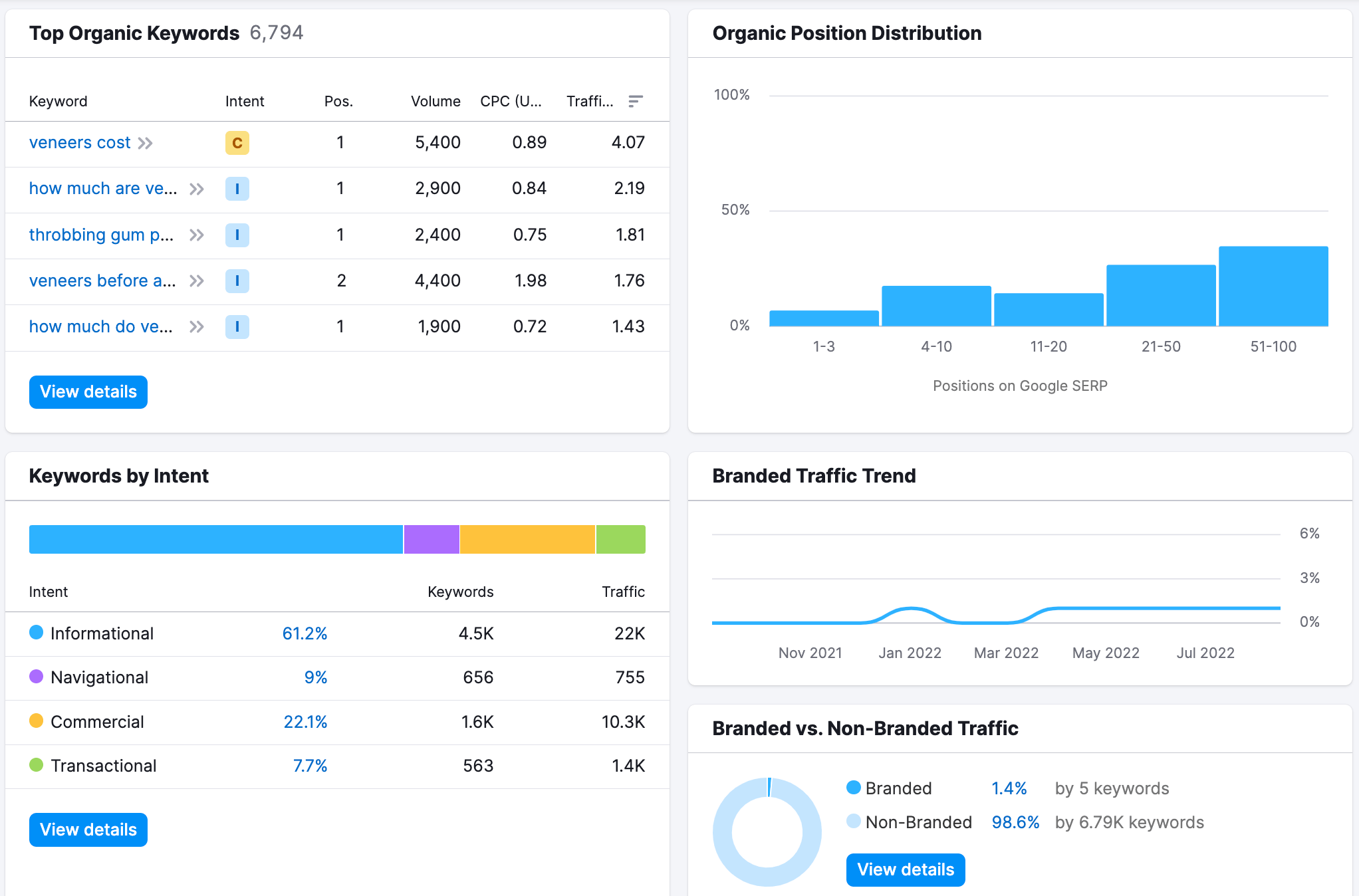 This data gave Ed ideas on what it would take to beat his competitors on Google’s #1 page and which keywords were the most lucrative for his business.

“Competitive analysis is the best there is. Other tools vastly overestimate traffic, Semrush gave me a precise idea of how I ranked against other sites. It was spookily accurate!”
Essentially, Ed wanted to outrank his local competitors. The Semrush Position Tracking tool’s visibility stats painted the picture, and it was worrying: Smileworks’ competitors were ranking high for 30% of its keywords, while Smileworks was at only 4%.

Initially, Ed thought the number of keywords Smileworks was ranking for diluted the percentage of map results, but he drilled down data and found out they were actually badly underrepresented in the local pack.

Ed did a local citation audit based on the Semrush data and increased map pack listings dramatically in a short period of time: a 300% increase over a 4-week period!

Next, Smileworks dedicated Hub pages for each of its services. It began when Ed started research on how to create content around veneers.
The Position Tracking tool’s cannibalization report showed that there was a problem with self-competition on the veneers costs page.
“I wasn’t ranking for any veneers cost terms, and the cost is huge in veneers!” recalls Ed. 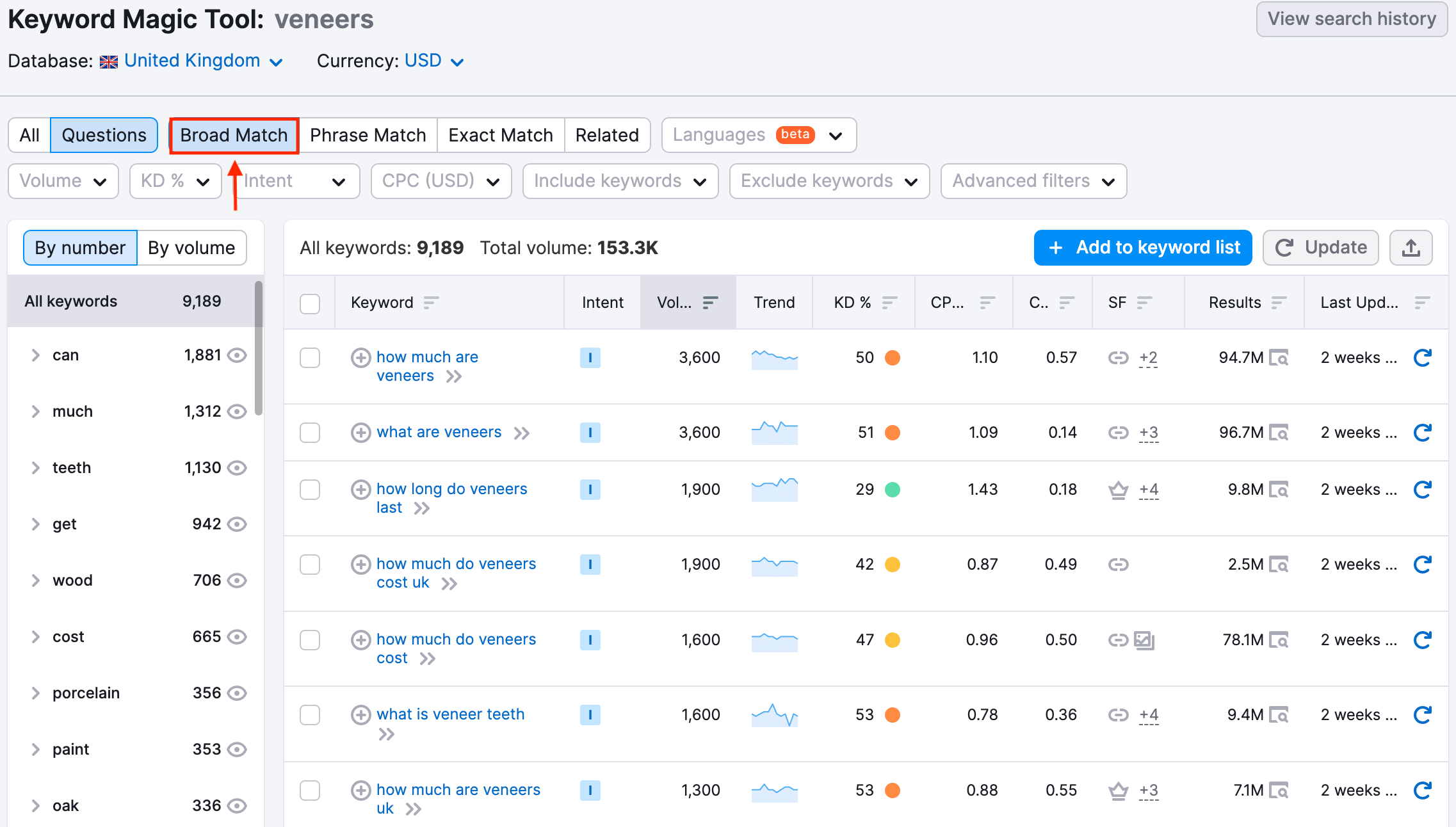 He did quick keyword research in the Semrush Keyword Magic Tool and filtered the results by the questions people were looking for. This helped him to discover that ‘costs’ was a separate topic where veneers are concerned and that led him to introduce pages dedicated to both, and they are now linked to one another. “Insights like that have been invaluable,” says Ed.
The results have been truly impressive.

In just three years, Smileworks’ organic traffic grew more than 3 times. In July 2018, they were at 25,000 users a month and this is mainly from some national results. In July 2021, Smileworks got an average of 80,000 monthly visits.
“We are a local business and the data from Analytics is showing a good portion of this is from our local area and also from all over the world. But Semrush taught me that traffic and national appeal helps enormously with local rankings too. The two are inextricably linked.”
And the leads stats prove that the traffic they manage to gain through smartly mapped and inbound-driven content brings in qualified customers-to-be. “We get 25 leads a day now. Sometimes way more but the median is 25, and that’s more than enough for us as a business as I don’t want to exceed the £4 million in revenue mark”.

Taking advertising out of the equation

Usually, such growth would imply an increased marketing budget. The case with Smileworks was the opposite. Shortly after starting to use Semrush, Ed dramatically decreased paid media activities, reduced marketing expenses, and saw a 20% increase in Net Profit Margin.

This number is now even times higher and Smileworks stopped allocating any ad dollars whatsoever.

“I don’t buy media.  Why don’t you work out how much Semush has saved us?  We used to spend £8,000 on media a month. So add all that up over a few year period and you get a pretty good ROI,” shares Ed.

Customer base grows 24-fold while Organic Traffic skyrockets.
Since implementing SEMrush suite Smileworks’ customer base has seen a dramatic increase in the amount of online traffic as well as actual customers who book appointments. If a similar business enjoys an average of 2 leads a day, Smileworks have 25. “My biggest problem now is I cannot hire dentists fast enough.”
Revenue increased by 100% in under a year, up to £1M. Four years later, Smileworks is a £3.5M business.
Ed grew the practice from a margin of -5% to +38%, with an increase in top-line revenue of 100%. They have paid down all debts, minimized reliance on agencies, and cut ad spend by 90%.
Inbound marketing generates truly loyal customers.
The most important thing turned out to be patients that are genuinely interested in the company; they come to the practice with strong buyer intent and get the treatment they want. Booking conversion for Smileworks reaches 1 in 3 users as opposed to 1 in 10 in the recent past, and conversion on taking treatment is at 60% rather than an average of 20%.

“This is not simply a story of growth—although initially, it was. I’d treat it as a story of consolidation: we did the SEO work and it went so great that I was able to forget about it for months or years at a time. So I’m just checking back when things break or we lose positions. But dominating such a strong channel as Google means we literally don’t have to worry about getting customers and can focus on making our business better, as well as launching new businesses”.
PDF download
Find more success stories