Publicly traded cannabis companies continue to fly high, with some of the biggest stocks in the sector up as much as 70% in the past year alone. Not only that, the trend of cannabis legalization continues to provide the industry favorable environments to operate, suggesting that this is just the beginning for the next Bitcoin boom. And it is catching the attention of a growing number of investors.

In January 2020, Illinois will become the 11th U.S. state to legalize marijuana, expanding the cannabis market in the United States. It’s another sign of the public support to legalize the substance that is fueling the push toward legalizing it on the federal level.

The growing momentum to bring cannabis into the mainstream in the U.S. has intensified, especially since Canada last year became the first G7 nation to legalize the weed. The favorable economic effects of legalization have widely been touted, be it through increases in tax revenue, positive effects on employment rates, on GDP growth and even tourism.

So who exactly is investing in pot stocks?

Where there’s an opportunity in the stock market, you can normally bet on New York’s Wall Street investors jumping on the action first, taking advantage of an opportunity before the rest of the country even knew it was there. Well in this case, you’d be greatly mistaken!

First off, we took a percentage of the total Investing.com users in all 50 U.S. states from April-June 2019 interested in pages relating to marijuana stocks within our global financial markets platform. As it turns out, New York didn’t even make the top 10 of U.S. states interested in investing in the marijuana industry, coming in as a low as 17th.

The results do however show that users who have the highest degree of interest in the sector are based in states that have already legalized the substance: Maine (where 7.5% of Investing.com users in that state interested marijuana stocks), Massachusetts (6.1%), Michigan (5.6%), Alaska (5.2%), and California (5.1%). 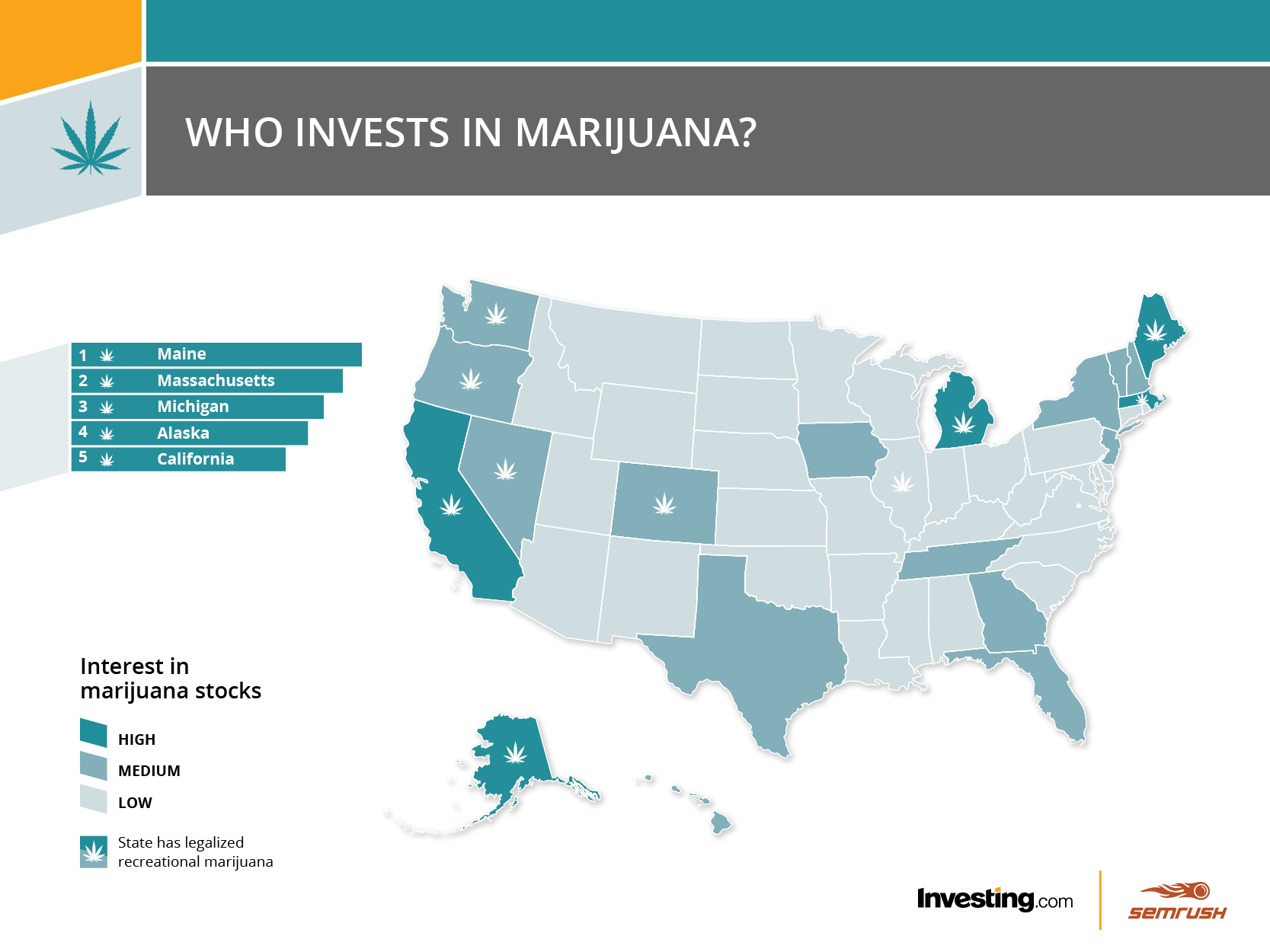 Furthermore, seven of the top 10 states interested in marijuana stocks are indeed states that have legalized pot. And all 10 states where marijuana has been legalized were in the top 20. It is interesting to note that Illinois, which only publicly announced last month its plan to legalize cannabis by 2020, was not in the top 20.

“What’s surprising to me is that New York and Pennsylvania - 2 states with high levels of personal marijuana use - don’t appear among the top 5 states,” said Jesse Cohen, U.S. Markets Analyst at Investing.com. “I would also have expected California, one of the first states to legalize cannabis, to be higher on the list. Alaska, meanwhile was a real shocker to me – but then again it just goes to show the strong effect legalization has on interest in cannabis stocks.”

Is there a catalyst for this interest?

Given the Canadian example, we decided to dive into the numbers even deeper looking to answer the question: Does the timing of legalization have a more direct impact on when investors show heightened interest in marijuana stocks?

Analyzing each of the aforementioned five states whose users had displayed the greatest interest in cannabis stocks, SEMrush proceeded to measure Google searches for the market’s top 10 marijuana stocks between the six months before and the six months after legalization in each state.

“The legalization of marijuana is without a doubt one of the biggest growth engines we'll see in the coming years, so the extra attention the industry is getting makes sense, said Clement Thibault, Senior Analyst at Investing.com. “Wall Street and investors are relentless in the pursuit of new growth and profit, and marijuana legalization offers that exactly.” 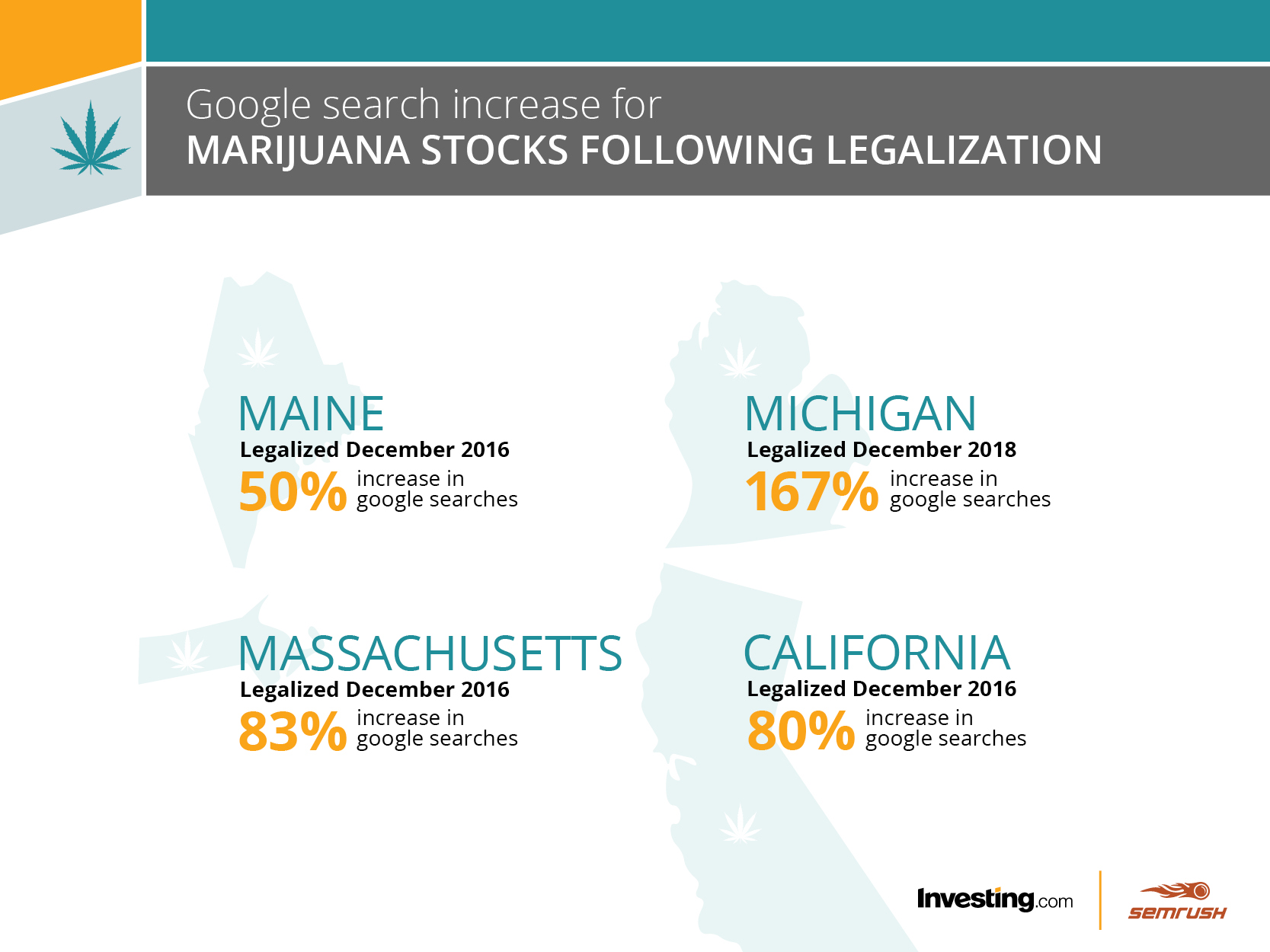 The trend is clear: There is a direct link between the legalization of cannabis and investor interest in pot stocks. All of this points to high times ahead for the cannabis sector as legalization continues to march forward in the U.S.

You can also read the latest studies by SEMrush on all things newsworthy - from tech, fashion to finance, or visit the SEMrush blog if you are interested to know more about the most up-to-date digital marketing insights!

SEMrush is an online visibility management and content marketing SaaS platform that ensures businesses get measurable results from online marketing. Trusted by more than 4,000,000 marketing professionals, SEMrush offers insights and solutions for companies in any industry to build, manage, and measure campaigns across all marketing channels.

If you are interested in other studies or need exclusive data, drop us a line at pr@semrush.com